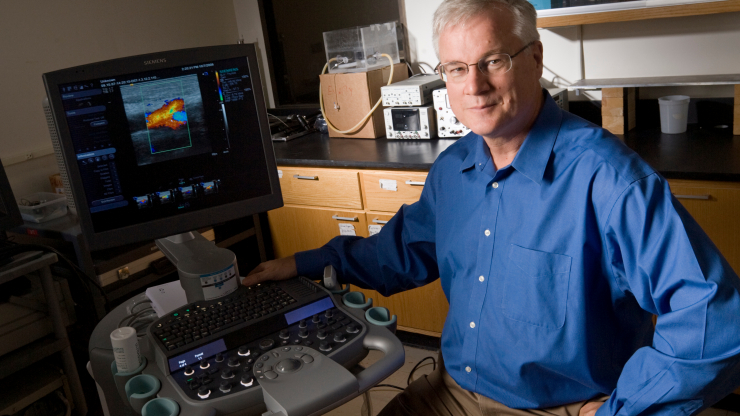 Gregg Trahey, the Robert Plonsey Distinguished Professor of Biomedical Engineering, was named a fellow of the Institute of Electrical and Electronics Engineers (IEEE), the world’s largest technical professional organization dedicated to advancing technology for the benefit of humanity.

Each year, following a rigorous evaluation procedure, the IEEE Fellow Committee recommends a select group of recipients for evaluation to IEEE fellow. Less than .1 percent of voting members are selected annually for this honor.

With more than 40 years of ultrasound-centered research, Trahey was recognized for his contributions to speckle tracking and acoustic radiation force imaging in medical ultrasound imaging.

Speckle occurs when ultrasound waves hit small structures in tissue and scatter. This scattering acts like noise and degrades an ultrasound image quality. Because of its negative impact on image quality, speckle was usually viewed as a hurdle for ultrasound imaging. But Trahey and his team probed how they could use the noise to instead gain further information from their images. By studying speckle patterns in two dimensions, the team saw that when tissue moved, the speckle patterns also moved. Trahey was able to track the displacement of speckle and use its movement to track blood flow using ultrasound, which hadn’t been done before.

Acoustic radiation force impulse (ARFI) imaging allows researchers to send an ultrasonic impulse into tissue, which pushes on and momentarily displaces the tissue. Trahey and his frequent collaborator Kathy Nightingale, the Theo Pilkington Distinguished Professor of Biomedical Engineering, discovered that they could use ARFI to gather information about a tissue’s material properties, based on how it responded to the application of force. The team found that they could use ARFI to remotely push on a target area, and then use ultrasound to image the resulting tissue motion to learn about the tissue’s stiffness.

Understanding a tissue’s stiffness could then be used as a biomarker and help with diagnostics. For example, researchers could send a pulse into breast tissue to push on a cyst. Based on the movement of the cyst, researchers could then use the resulting movement to detect if the cyst was filled with fluid or if the mass was hard and immovable. The ARFI research was so successful that it eventually led to the formation of an entirely new subfield of study in ultrasound.

“It is an honor to be selected as an IEEE Fellow,” says Trahey. “The IEEE’s journals and conferences provide the major forums for my lab’s dissemination or research results and for our learning of the work of our peers. Of course, as many of my colleagues can appreciate, my successes are largely due to the talent and hard work of my students, staff and colleagues.”

The IEEE Grade of Fellow is conferred by the IEEE Board of Directors upon a person with an outstanding record of accomplishments in any of the IEEE fields of interest. The total number selected in any one year cannot exceed one-tenth of one- percent of the total voting membership. IEEE Fellow is the highest grade of membership and is recognized by the technical community as a prestigious honor and an important career achievement.

The IEEE is the world’s leading professional association for advancing technology for humanity. Through its 400,000  plus members in 160 countries, the association is a leading authority on a wide variety of areas ranging from aerospace systems, computers and telecommunications to biomedical engineering, electric power and consumer electronics.