DURHAM, N.C. -- Using a novel genetic ‘editing’ technique, Duke University biomedical engineers have been able to repair a defect responsible for one of the most common inherited disorders, Duchenne muscular dystrophy, in cell samples from Duchenne patients.

Instead of the common gene therapy approach of adding new genetic material to “override” the faulty gene, the Duke scientists have developed a way to change the existing mutated gene responsible for the disorder into a normally functioning gene. The Duke researchers believe their approach could be safer and more stable than current methods of gene therapy.

The researchers are now conducting further tests of this new approach in animal models of the disease.

Duchenne muscular dystrophy is a genetic disease affecting one in 3,600 newborn males. The genetic mutation is found on the X chromosome, of which males have only one copy. (Females, with two X chromosomes, presumably have at least one good copy of the gene.)

Patients with Duchenne muscular dystrophy cannot produce the protein known as dystrophin, which is essential in maintaining the structural integrity of muscle fibers. Over time, patients with the disorder suffer gradual muscle deterioration, which leads to paralysis and eventual death, usually by age 25.

“Conventional genetic approaches to treating the disease involve adding normal genes to compensate for the mutated genes,” said Charles Gersbach, assistant professor of biomedical engineering at Duke’s Pratt School of Engineering and Department of Orthopaedic Surgery and member of Duke’s Institute for Genome Sciences and Policy. “However, this can cause other unforeseen problems, or the beneficial effect does not always last very long.

“Our approach actually repairs the faulty gene, which is a lot simpler,” said David Ousterout, the Duke biomedical engineering graduate student in the Gersbach lab who led the work. “It finds the faulty gene, and fixes it so it can start producing a functional protein again.”

The results of the Duke study were published online in Molecular Therapy, the journal of the American Society for Gene and Cell Therapy. The project was supported by the Hartwell Foundation, the March of Dimes Foundation, and National Institutes of Health.

The Duke experiments, which were carried out in cell samples from Duchenne muscular dystrophy patients, were made possible by using a new technology for building synthetic proteins known as transcription activator-like effector nucleases (TALENs), which are artificial enzymes that can be engineered to bind to and modify almost any gene sequence.

These TALENs bind to the defective gene, and can correct the mutation to create a normally functioning gene.

“There is currently no effective treatment for this disease,” Gersbach said. “Patients usually are in a wheelchair by the age of ten and many die in their late teens or early twenties.” 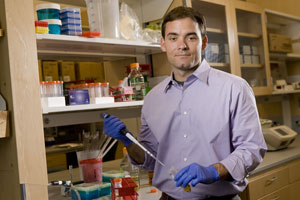 Duchenne muscular dystrophy has been extensively studied by scientists, and it is believed that more than 60 percent of patients with this type of mutation can be treated with this novel genetic approach.

“Previous studies indicate that restoring the production of dystrophin proteins will be highly functional and alleviate disease symptoms when expressed in skeletal muscle tissue,” said Ousterout.

Similar approaches could be helpful in treating other genetic diseases where a few gene mutations are responsible, such as sickle cell disease, hemophilia, or other muscular dystrophies, Gersbach said.