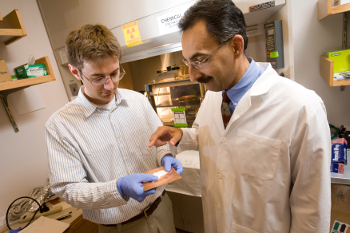 Farshid Guilak, professor of orthopaedic surgery, biomedical engineering and mechanical engineering and materials science at Duke, has been named the inaugural recipient of the Biomedical Engineering Society (BMES) Innovator Award for Cell and Molecular Bioengineering. BMES is the premier organization in bioengineering, covering all aspects of engineering and technology to advance human health and well-being. The award was presented to Guilak in January 2014 during the society’s annual conference in La Jolla, Calif.

Guilak was lauded for his many contributions to the field, including recent research on osteoarthritis. His lab demonstrated the ability to produce an unlimited number of stem cells that can turn into cartilage in a mouse model. This is an important line of research as cartilage is not able to regenerate on its own within the human body. He is furthering his research by combining genome editing, gene therapy and synthetic biology to modify the genome of the cell in a way that will let researchers engineer completely new biological therapies for arthritis.

“It is especially impressive that Farsh is the inaugural recipient as there is no doubt a significant build-up of deserving candidates,” said Tom Katsouleas, Vinik Dean of the Pratt School of Engineering. “His contributions to the field, and to Duke and to Pratt, are simply extraordinary. I can’t say enough how very proud we all are of him.”