Every Snowflake Is Not Unique

They all share one architecture, determined by the way heat flows.

People like to say that every snowflake is unique. On the level of execution and fine detail, that may or may not be true. After all, who has seen every snowflake?

It is certain, however, that every snowflake conforms to only one architecture: a flat star with six fishbones connected at the center. What’s more, that structure is predictable provided that we recognize the underlying principle: first, that something flows, in this case heat, and, second, that the natural tendency of all flows is to evolve into architectures that provide easier access. It’s another example of the constructal law. 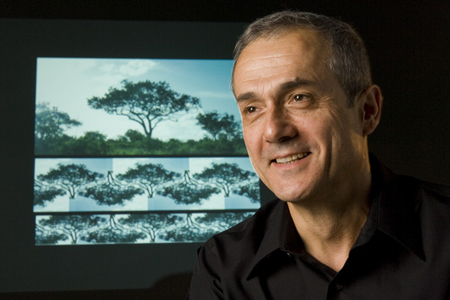 Here is how to predict the shape and structure of the snowflake. In the beginning, there is cold humid air, below 0 °C. Then, all of a sudden, around a tiny speck of dust, ice forms and grows as a spherical bead. Counterintuitively, the bead is warmer than everything else around it, and heat flows away from it in all directions. What heat? The latent heat of solidification, which is released by the water vapor that becomes solid at the bead surface.

There comes a critical time when the spherical bead is no longer an efficient architecture for dissipating heat. The principle calls for design change, toward faster heat release and solidification. The growth of ice morphs abruptly into a ball continued in one plane by needles. Because of the configuration of the water molecule, the needles grow in six directions. The flat star transfers heat to the surroundings more easily than a spherical bead with the same diameter.

Incidentally, why does the snowflake grow in one plane, as a flat star? Because needles in one plane grow faster (with more access to cold air) than needles growing in all directions.

There comes a second critical moment when the tip of every needle feels the same as the original bead. Each tip would generate six new needles, except that only the three that point forward can grow. One needle cannot grow backward because that place is occupied by the mother needle; and the two backward side needles cannot grow either, because the air in the interstices (between two mother needles) is no longer cold.

This stepwise evolutionary design continues as long as the new forward pointing needles find cold air that serves as sink for the heat released by their growth.

To give credit to the view that every snowflake is unique, the actual configuration depends on many secondary effects, which are of random origin. Very cold air makes needles that are sharp and fast growing (fluffy snow). Cold air just under 0 °C makes fat needles; the snowflake falls like a leaf; it bumps into and sticks to its neighbors, and the wind damages all the snowflakes in random ways due to air turbulence.

In spite of the obvious diversity, the human mind records the snowflake design in the same simple way that the mind predicts the design from principle. The table cloth pattern, the Christmas tree ornament, and the snowflake predicted from the constructal law are one design. The three artists did not talk to each other while making their drawings. Such is organization in nature, and such is life.

Adrian Bejan is the J. A. Jones Distinguished Professor of mechanical engineering at Duke University.