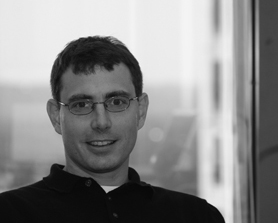 What gave you the idea to start Enthought?

Even as a child, I knew I wanted to start a company and that it would involve something technical. I’d always tinkered with mechanics and electronics and had become interested in the software required to drive them, and those things came together when I was doing my graduate work at Duke.

Travis and I knew that the state of scientific analytic software was poor—and that we could use the Python open-source programming language to change that. So we saw this niche and, funded by friends and family, struck out on our own.

What have been the company’s greatest challenges?

We started Enthought in Austin, Texas, in 2001, right when the economy was crashing. It was a difficult time because the markets weren’t steady and we were always focused on staying profitable.

The plus side was that Austin had attracted a lot of great tech folks, companies were folding and we were hiring. Fortunately, clients wanted us to apply our scientific chops to their problem sets, so we were able to keep going by consulting.

The 2008 financial crash made for another tough time because the many projects we were working on in the oil and financial industries screeched to a halt. We recovered, but we’ve had to be very careful about expenditures and where we choose to invest.

Enthought’s current challenge is transitioning from primarily consulting to primarily product revenue. We’re learning a completely new set of skills, which is both difficult and rewarding.

What have you learned from owning your own business?

I’ve learned that as a small company, we can’t rely too much on big clients or have too many clients in one industry. We did that early on, and it really hurt when we’d lose a client or a problem would arise in a certain industry.

I’ve come to appreciate other skill sets a lot more, and think I was too slow to hire employees in areas like sales and accounting. I started out thinking only about the tech side of things and quickly realized the challenge in bringing together the many different facets that must support one another in a well-functioning organization. It’s been very rewarding learning to build a company that works.

And because it seems that all companies at some point experience big economic shocks beyond their control, I’ve learned the importance of keeping some funds in reserve.

What impact have your graduate studies at Pratt had on your career?

Working in Dr. (William T.) Joines’s lab, I had a lot of freedom to explore my own ideas under the guidance of an expert. That freedom taught me how to manage and pragmatically choose what I was working on.

And I still think about what I learned about management style from (department chair) Larry Carin. He gave people lots of freedom, and through regular communication, was able to keep 20-plus-person research teams functioning at a high level. I also did a lot of work involving target detection and machine learning—experience that helps solve many of the problem sets we see at Enthought.

What's next for Enthought?

We just introduced Canopy, a new Python-based analysis environment for scientists, engineers and analysts. In the coming years, we see it growing as both an end-user analysis tool and a platform for technical applications within the enterprise.

It’s been rewarding to play a role in Python’s growth within the scientific community and to work with interesting people, doing something we all love. We’re on a great trajectory.