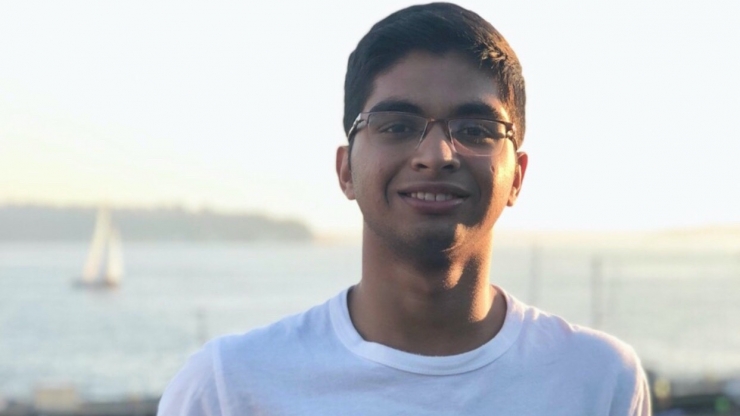 Can you name everyone with whom you have come into contact over the last 14 days? If you work from home these days and have your groceries delivered, it’s probably a piece of cake. But what if you are a cashier at the grocery store, or work in a hospital, or are a student living in a residential hall?

It was a question that was bothering Duke Engineering first-year student Shehzan Maredia as early as February 2020, as he witnessed the rapid proliferation of COVID-19 cases around the world. So Maredia did what comes naturally to him: he started working on a solution.

He gathered a handful of classmates from Duke and the impromptu team began coding an app to give people an idea of their exposure status based on where they had carried their phones, and where they might have shared space with individuals who later tested positive for COVID-19.  Maredia said he spent around 20 hours a day working to launch the app, but the team soon came up against a set of roadblocks that stymied their breakneck pace of progress. There were challenges to widespread adoption—Google and Apple had tamped down on COVID-19 apps like Maredia’s, that were unaffiliated with a government agency, educational institution or health nonprofit. And, being unaffiliated with a larger organization meant that there were deficits in both budget and institutional resources.  “I realized here were a lot of things we would run into as we tried to scale—notably, legal issues like writing terms of service and protecting against liability,” he said.

Duke and entrepreneurship go hand in hand, though, and students like Maredia can tap into a broad network of experts for help. He knew Duke Engineering’s Executive in Residence, Steve McClelland, from his Founder’s Workshop he had been part of, and reached out to him; McClelland and Duke Innovation & Entrepreneurship colleague Howie Rhee helped Maredia access a wide range of resources, including legal services.

“We got quite a bit of traction once we had our initial version out,” said Maredia. The team won two international virtual hackathons—Datavant and HackCovid, which helped the app gain exposure. Shortly afterward, Maredia was offered what he described as an “insanely large amount of money” if he agreed to sell the app to a private party—but he came away with the impression that the prospective buyer didn’t share his team’s prioritization of user privacy.

That, also, bothered Maredia. ContainIt wasn’t his first business venture—in high school he launched an educational tech company that offered students personalized practice problem sets for high-level educational competitions, which he later sold—but he said the motivation to build ContainIt was different. “This is for social impact,” said Maredia, “Not for money.”

Around this time, Maredia saw a Facebook post about a contact tracing app called NOVID that was developed and launched by Carnegie Mellon University mathematician Po-Shen Loh. NOVID uses ultrasound to get more accurate information about potential exposures—GPS and Bluetooth can mistakenly assume an exposure event when users are near each other, even when they are separated by walls.  Ultrasound, on the other hand, “sees” the walls and accurately labels the event a non-exposure.

Maredia emailed Loh to learn more. “Initially, learning about his project was my only intention, but after talking to him, I learned about how we shared an identical mission--building something good to help slow the spread of COVID,” said Maredia.  “It just made sense to join forces.”

Again, McClelland helped Maredia navigate tricky entrepreneurial waters—this time, by guiding him through NOVID’s acquisition of ContainIt in late April. The entire process, from writing the first line of code to finalizing the merger with NOVID, happened in less than two months.

“We have had a few cases where students have really followed their passion through this crisis and done a lot of work in very short window of time,” said McClelland. “It is exciting, but also a little chaotic.”

Contact tracing has become an essential component of public health strategies to stamp out COVID-19 but gathering information from those who have tested positive for the disease about who else they may have exposed takes a lot of time and significant human resources. Maredia is confident that the NOVID app can help automate the process, while protecting users’ privacy. (The app collects neither GPS nor personal information.)

After ContainIt merged with NOVID, Maredia’s role expanded to deployment and growth, in addition to development. Much of his time these days is spent building partnerships with organizations including governments, driving the app’s social media campaigns and promoting its “campus ambassador” program.

Maredia said that working on a team that is driven by social impact has been an amazing experience. “The team is super dedicated, and the most motivated I’ve ever met,” he said, “and I just want to be part of the effort.”