Innovative research like that being carried out at Duke is essential to the future of energy security, sustainability and environmental safety, according to U.S. Department of Energy deputy secretary.

Innovative research like that being carried out at Duke is essential to the future of energy security, sustainability and environmental safety, the deputy secretary of the U.S. Department of Energy told an audience at the Sanford School of Public Policy after a daylong visit with Duke students, faculty and research staff. 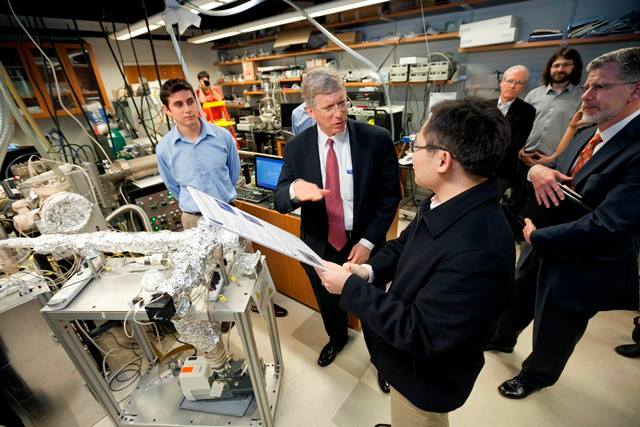 Daniel Poneman visited the campus on April 21, meeting in a roundtable with energy students, hearing from researchers and faculty who won support in the first round of grants made by the Energy Initiative’s energy research seed fund, and taking a firsthand look at energy- and defense-related research in labs at the Pratt School of Engineering.

"At the Department of Energy, we’re focused on the future. We’re focused on the biggest problems we face as a nation – I humbly submit to you, the biggest problems we face as a planet," Poneman told the Sanford audience. He identified those problems as "issues related to nuclear security, issues related to energy transformation, of the possibility of dramatic, even catastrophic climate change. And the answers that we need to those challenges come from you, from places like this."

Poneman came as a guest of the Energy Initiative and its director, Richard Newell; the two became acquainted when Poneman helped persuade Newell to leave Duke University to become head of the U.S. Energy Information Administration, a post Newell held from 2009 until he returned to Duke in  2011.

The visit was also hosted by the Sanford School of Public Policy, the Duke University Program in American Grand Strategy, and the Pratt School of Engineering, where Dean Tom Katsouleas led a tour of three electrical and computer engineering (ECE) labs where energy research is under way. 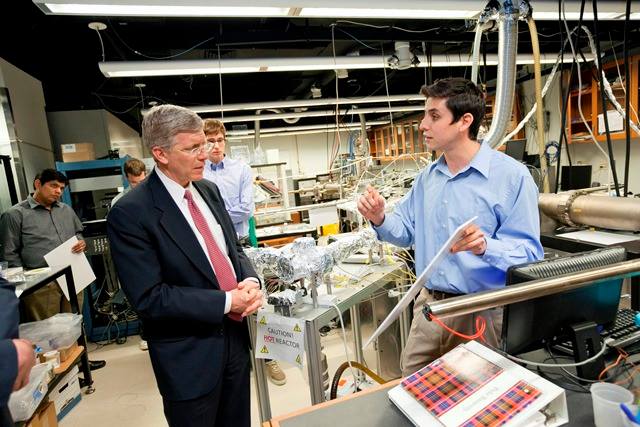 The tour began inthe laboratory of professor David Smith, where graduate students talked about their work to use compressive millimeter wave technology to design new airport security devices. This technology images so quickly that passengers could be scanned as they walk through the hall on their way to their terminals, rather than having to wait in line to walk through a metal detector or stand in a glass booth for a scan. The scanner works by using metamaterials to scan different frequencies of waves and compressive imaging techniques to quickly build an image from the multiple sweeps.

In professor Jeff Glass’s laboratory, Poneman heard about three different technologies being pursued through the use of an atomic layer deposition system. This technology allows researchers to precisely place single layers of atoms on an existing surface. 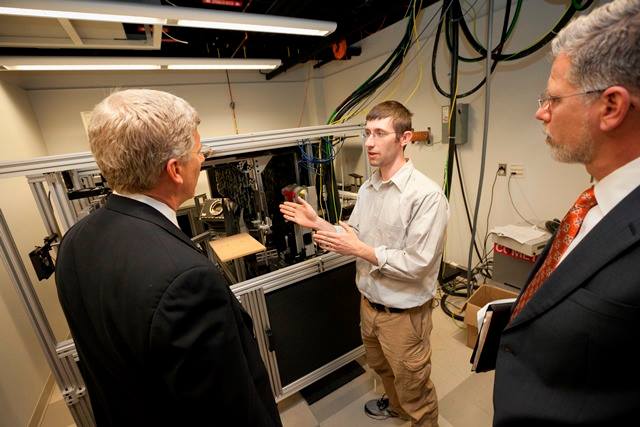 One project is seeking to engineer a better catalyst by placing an aluminum oxide shell on a nickel surface to make better use of shale gasses. Another is building a new type of solar cell with an embedded supercapacitor to store solar energy for 24 hours or more. A third project is trying to increase the efficiency of systems that use the energy of sunlight to break apart water molecules and harvest hydrogen gas.

Poneman got a look at Duke’s gigapixel camera on the way to the laboratory of professor David Brady. The technology uses numerous spherical lenses and photoreceptors and instantly stitches all of the photos together to create a single picture with gigapixel resolution. After that demonstration, graduate students presented their work to engineer a new type of X-ray scanning device. Instead of simply taking images of shadows created by the X-rays as they are unable to pass through certain materials, the machine measures how the X-rays bounce off of objects to determine what they are.