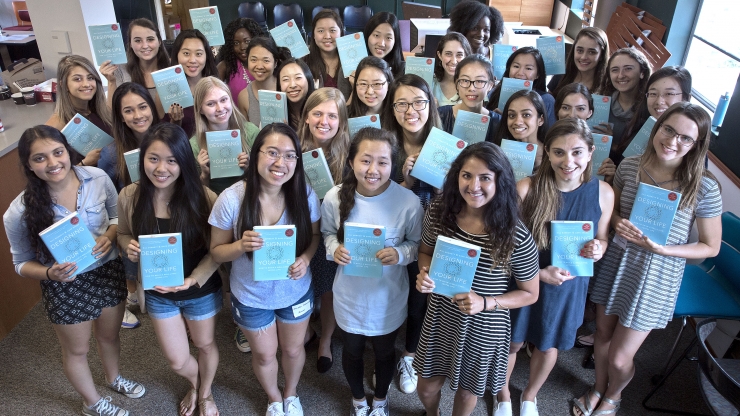 For Nigel Malaba, being selected for the 2017 class of Duke Technology Scholars is another big step on a remarkable journey from Zimbabwe to Duke University and on to Silicon Valley.

For leaders in Duke’s Pratt School of Engineering and Trinity College of Arts & Sciences, Malaba and her 33 fellow 2017 “DTech” scholars represent a next and accelerating step to increase the number of tech-savvy women working in computer science and engineering fields.

Launched in an era that’s seen a precipitous national decline in women majoring in computing disciplines -- just one in four individuals working in the profession is female -- Duke’s new program matches promising students early in their academic careers with a suite of opportunities to grow their interest in coding and technology. The program pairs scholars with knowledgeable mentors, provides career planning and support, builds community through shared activities and co-housing, and connects participants with summer internships at leading technology firms.

“Being a part of this program is a way for me to grow as a professional and to learn from the best mentors in the technology industry,” said Malaba, who was born in Zimbabwe and is a rising senior in electrical and computer engineering at Duke. As a DTech Scholar, she’s interning with Aeris, a pioneer in the Internet of Things -- the network of computing devices embedded in everyday objects, from the factory floor to automobile dashboards to kitchen appliances.

“Being a part of this program is a way for me to grow as a professional and to learn from the best mentors in the technology industry. By the end of the program, I expect to be confident in my software engineering skills and to know that I can be a software engineer because I've done it before.”

DTech was formed in 2016 as a partnership between Duke’s Departments of Computer Science and Electrical & Computer Engineering to attract and retain women in computing studies and create a pipeline of women into industry. It’s open to Duke students who have successfully completed Computer Science 201: Data Structures and Algorithms or a higher-level programming course, and the program places as many qualified applicants in internships as possible.

The inaugural class of 10 scholars completed internships with companies such as Apple, Intuit and Carbon3D, along with receiving mentorship and professional development training. A post-pilot survey found that 100 percent of participants planned to continue in tech careers, said program director Monica Jenkins. In fact, she noted, “Every one of them has returned to Silicon Valley for internships this year, and two have already accepted full-time positions.”

The pilot’s success turbo-charged interest in the program among applicants and companies alike. This year, 34 scholars (selected from 80 applicants) received more than 75 placement offers from a growing roster of participating companies—up from seven last year to 22 in 2017. Among them is Fanatics, a leader in licensed college and professional sports merchandise with West Coast headquarters in San Mateo, Calif. Fanatics provided internships to two scholars in 2016. This summer, the company has seven DTech interns.

“Duke computer science and computer engineering are among the best in the country, and the DTech scholars are the best of the best,” said Matt Madrigal, chief technology and product officer for Fanatics. “We bring our interns into our work right away. We’ve paired each intern with a senior engineer or technical manager from our teams, and together they have 12 weeks to create a real deliverable to solve one of the complex and very cool problems we are working on.”

Several interns are working on projects related to Fanatics’s new e-commerce platform, including developing a new predictive product recommendation feature. In addition to coding, there are career-development discussions on topics ranging from working in a corporate environment to what to expect on job interviews, Madrigal said.

Catherine Wood, a senior majoring in mechanical engineering and minoring in electrical and computer engineering, interned last summer at Carbon3D, a maker of rapid 3D prototyping machines, and is returning there this year.  She said the mentorship component of the program has been particularly powerful.

“I was introduced to my incredible mentor through the DTech program, and throughout the year we have become very close,” Wood said. “She has been a great resource with pretty much everything from friends to school to work. Having someone else to talk to from a different perspective, with a different background has been wonderful.”

In addition to Madrigal at Fanatics, DTech program mentors -- most of whom are Duke alumni -- have included a deputy director of the National Geospatial-Intelligence Agency and the managing counsel at drug maker Merck & Co.

“My internship at Apple was an incredible learning experience. I learned new languages, new frameworks, how code is written and reviewed when you are part of a team, and how to present my projects.”

A key challenge DTech seeks to overcome is in sustaining interest and enthusiasm for tech throughout four years of college. At Duke, women make up 50 percent of the students in the basic Computer Science 101 course, but in the later academic years they comprise just 20 percent of computer science majors and 18 percent of electrical and computer engineering majors.

“This showed us that intervention early in the academic career is critical,” said Valerie Ashby, dean of the Trinity College of Arts and Sciences. “By providing these mentorships and internship opportunities for women as early as sophomore year, the DTech Scholars program provides a model for intervention that increases the probability that these women will thrive in an industry that is at the backbone of our society and economy.”

Another returning scholar is Lisa Sapozhnikov, a computer science-electrical engineering and computer science double major. She interned at Apple last year and will spend this summer working at YouTube.

“Apple was an incredible learning experience: I learned new languages, new frameworks, and how code is written and reviewed when you are part of a team,” she said. “I'm expecting that at YouTube I'll be able to jump into my project faster, using my experiences from last summer.”

Increasing the number of women in science and engineering is part of a broader priority on diversity and inclusion for the Pratt School and for Duke, said Ravi V. Bellamkonda, the Vinik Dean of Engineering at Duke.

“We know that the more diverse a team is, the more likely it is to find a solution to the challenging problem they are working on,” he said. “Engineering and computer science need to work to attract more women not only because it is the right thing to do, but to generate better technologies. We need as diverse a group as possible working on the biggest challenges facing our world.”

Learn more about the Duke Technology Scholars Program at dtech.duke.edu.