In 1986, a student profiled the first two female graduates of Duke's College of Engineering 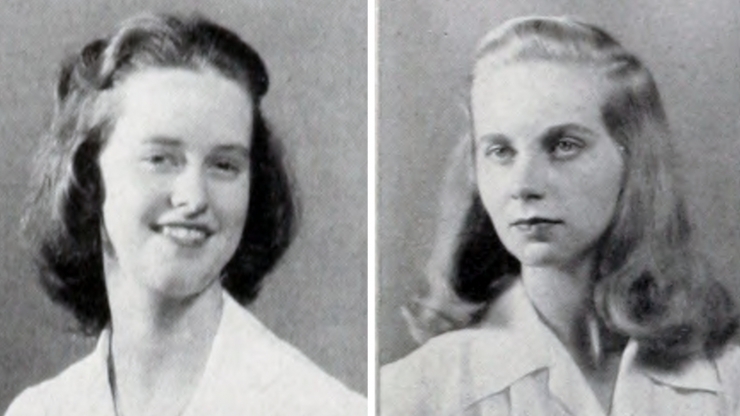 From the Fall 1986 DukEngineer Magazine

Yes there was some discrimination, but for each person that discriminated there was someone else saying "We like what you're doing,' " states Mrs. Marie Reel (née Foote) reflecting upon her engineering days at Duke. Both she and Mrs. Muriel Williams (nee Theorsen— "Cleo" for short) studied electrical engineering at Duke and graduated as the first two women engineers in 1946. What might appear as an unavoidable obstacle, sex discrimination, did not affect these two women. In fact, Mrs. Williams replied, "There was absolutely no discrimination. The professors and students were very objective."

Duke still has the same appeal as it did forty years ago. Mrs. Reel chose Duke, as many of today's entering women engineers, because of its strong engineering program as well as its strong liberal arts program. In contrast, Duke first attracted Mrs. Williams because of its beautiful campus, one that she first saw driving through—in the not-so-popular car—on a family vacation when she was twelve. These two women met at Duke, where they first began their careers as women engineers.

While at Duke, Mrs. Reel involved herself in the Chapel Choir and also wrote for The DukEngineer. Her memories of Duke are "wonderful" and she prides Duke most for its opportunities in academics, leadership, and moral growth.

She worked for IEEE for two years after college before going to Germany with her husband, who was in the army, and raising two children. Upon returning to the United States, she wished to enroll as a student at Texas A&M, but was denied admission and instead received a job as an instructor in their electrical engineering department. She describes this experience with fond enthusiasm.

Although Mrs. Reel concedes that there are many more opportunities for women in engineering then there were forty years ago, she led a very successful and interesting career. After working for Texas A&M, she worked with the Atlantic Research Corporation as a technical writer in the Central Group; her responsibilities included writing monthly reports and procurement specifications for rocket motors. After another period of time in Germany, she came back to work in the Atlantic Research Corporation's Telecommunications Department, where she again served as a technical writer and also as an engineering consultant. She achieved the position of chief specification engineer for the Washington, DC, area.

Mrs. Reel's interests extend beyond engineering. She is an avid gardener, and enjoys hunting, fishing, and knitting also. Her involvement in her community is commendable; she is president of her community association, and she volunteers her knowledge and time recording math textbooks for the blind.

Mrs. Muriel Williams, unlike Mrs. Reel, did not first enter Duke as an engineering student. After one year of studying Physics at Duke, she earned a scholarship from the Curtiss Wright Company (Corporation now), as part of their drive to get more women involved in the war effort. One thousand women having at least two years of technical background were sent to ten good schools on this scholarship. Mrs. Williams, as the youngest girl and with only one year of technical training, was sent to Rensselaer Polytechnic Institute for twelve intensive months of a specially designed course; she was trained to help in airplane plants. She worked at Curtiss Wright for some time, before returning to Duke and entering as an engineering student in the navy V-12 program. There were mostly navy officer candidates in her classes and because these men were needed in the war, she attended classes the entire year from January through January. As a result, Mrs. Williams earned her degree in the same year she would have even if she had not worked at Curtiss Wright. She remembers studying very hard, having to wear stockings on Sundays, wearing her raincoat over her pajamas for early morning classes, listening to Perry Como sing in the chapel, and having German prisoners of war doing yard work on Duke campus.

Mrs. Williams says that although she never felt discrimination in industry, there were restrictions. There was a tendency to place women in routine, boring jobs. Right out of school she worked a "monotonous" job calibrating ammeters for the government. After returning from Brazil with her father she worked on a "boring" project at MIT choosing American technical books for an engineeering school in Brazil. She did not find all of her jobs to be that uninteresting, however. After marrying Mr. George Williams, also an engineer, she worked as a draftsman for topographic maps, as a statistician for Minute Maid orange juice, and in conjunction with a precision machine shop calibrating tools to one-tenthousandth of an inch. Her engineering background proved very useful and provided her the opportunity to seek and pursue a variety of careers. She most enjoyed her work as a technical editor where she was involved with all of the company's projects, not just one specific one.

Both women are very encouraging and enthusiastic about engineering. According to Mrs. Reel, "aside from professional opportunities, it is just a good education on how the world works." Especially for women, an engineering education is beneficial; it provides that knowledge and expertise necessary for rapidly growing technology as well as the ability to "spot a sleezy repairman."

Brenda Chunn is a freshman in Biomedical Engineering.