From Tiny Details to Big Picture

The James L. Meriam Professor of Civil and Environmental Engineering, Wiesner began his studies in the liberal arts and was originally a musician. He still plays bass with local blues and jazz groups as well as community orchestras. In 2015, Wiesner was also inducted into the National Academy of Engineering, among the highest professional honors for engineers.

When asked what the role of a department head is at a major research university like Duke, Mark Wiesner has a definitive answer—facilitator.

"Making the resources we have available to the faculty and students, and allowing the faculty to do their jobs," says Wiesner, chair of the civil and environmental engineering department at Duke, who seems to know what he's talking about. "I've always been lucky enough to have had great chairs here." 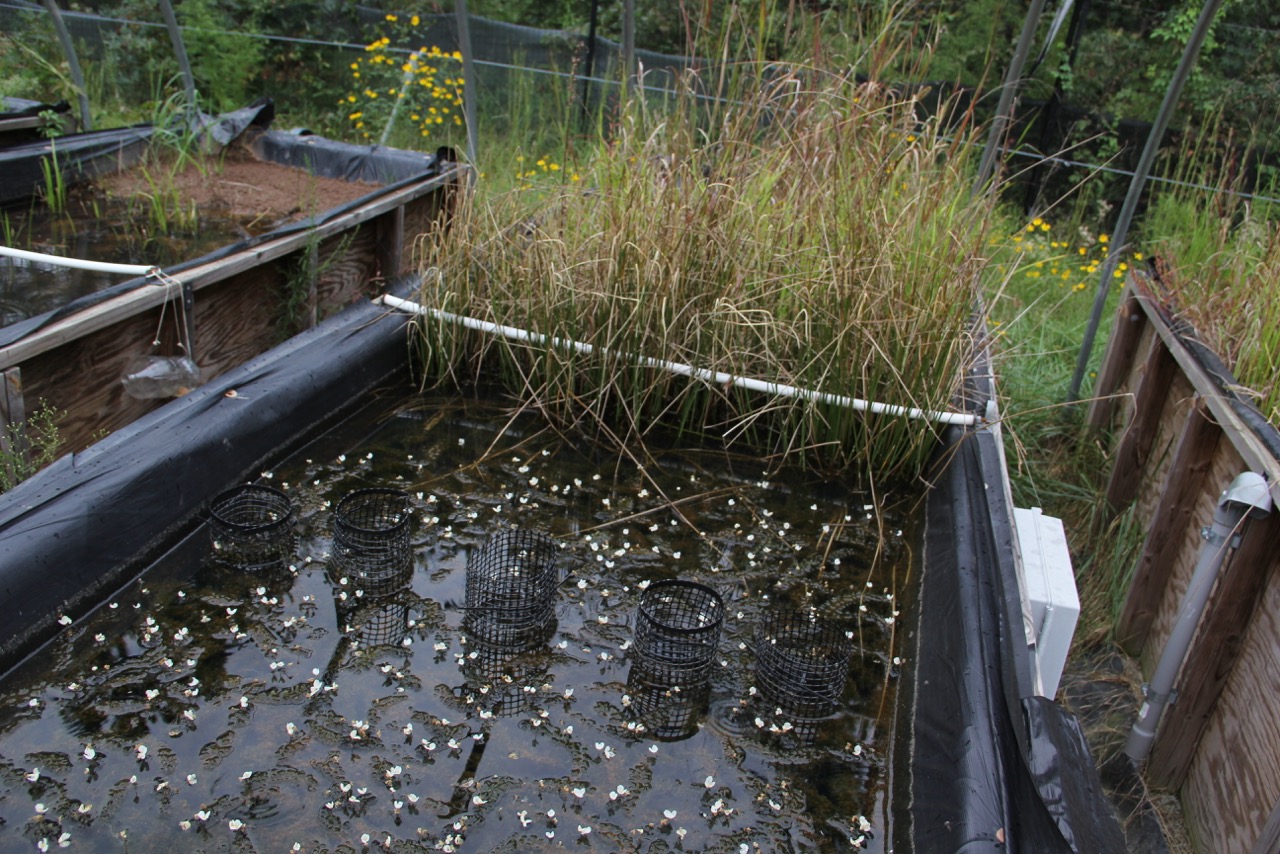 Wiesner is perhaps best known as the director of the Center for the Environmental Implications of NanoTechnology (CEINT), an inter-university research institute he helped found here at Duke. But as of this past July, Wiesner holds another major position within the Blue Devil community: he succeeded John Albertson as the chair of Pratt's Department of Civil & Environmental Engineering. Under Albertson, the department enjoyed a 50  percent increase in new awards for research and rose considerably in the U.S. News rankings of environmental engineering programs.

As I sit down in his Hudson Hall office for the first time, Wiesner apologizes for his jet lag—he’s just returned from a trip to China, where he’ll be again next week before traveling to Vienna. (The life of an internationally awarded researcher, unsurprisingly, involves little rest.) The eager freshman in me has a million questions for him, but I force myself to relax. We’ll take it from the beginning, I decide, with CEINT.

Each word measured and deliberate, Wiesner starts to tell his story.

The Center for the Environmental Implications of NanoTechnology

While researching water treatment technology at Rice University, Wiesner first began to investigate nanomaterials—particulates billionths of a meter in size. Modern instrumentation offers today’s scientists unprecedented access to the nano-world, which, he recalls, “we didn’t appreciate, and certainly couldn’t quantify…thirty years ago.” Wiesner started working with nanotechnology in membrane transport systems, but the scope of his interest quickly broadened.

“Like any good environmental scientist, when you start using new materials, you start to ask questions [about] the environmental implications of these materials,” he recounts. With new abilities to track and understand the movement of nanoparticles through systems, researchers were realizing that answers to these questions were suddenly within reach.

Growing international interest in nanomaterials displayed that the potential effects and applications of the “nano-enabled economy” were poorly understood. As director of Rice’s Energy & Environmental Systems Institute, Wiesner partnered with a group that included Nobel Laureate Richard Smalley and co-authored a proposal to the National Science Foundation. Their goal was to create a center to study nanotechnology in environmental and biological engineering; Wiesner authored the environmental component, while Jennifer West, now a Duke BME faculty member, led the bioengineering portion.

“There’s a huge need for information [about nanomaterials] that could help guide regulations. That’s potentially going to have an impact on international commerce [and] the way goods move across borders,” Wiesner explains. 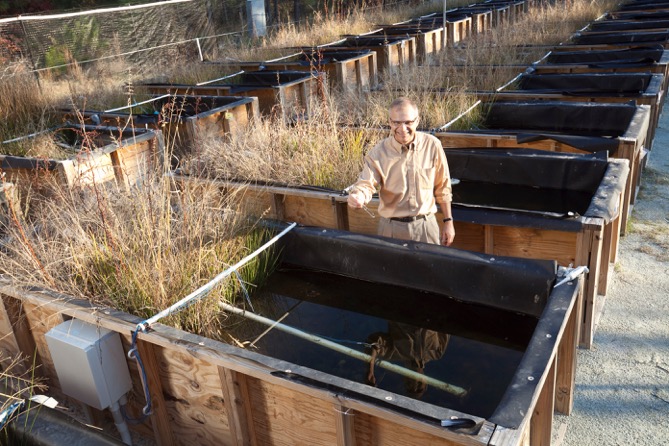 Nevertheless, the proposal stalled, with administrators unable to agree on how the proposed institute would focus their efforts. Many were cold to the idea of studying nanomaterials’ environmental consequences, which Wiesner insisted should be included in the proposal. “Looking at it before it possibly becomes a problem,” he explains, is imperative.

When Wiesner began working at Duke in 2006, he found renewed enthusiasm toward the idea of an institute explicitly studying the implications of nanomaterials, both artificial and natural, on the environment. With support from Congress, a group of researchers from seven universities founded the Center for the Environmental Implications of Nano Technology with Wiesner as director. CEINT, pronounced ‘saint,’ is headquartered at Duke—which, he says, is no accident.

“This is just the perfect place for ‘doing’ environment because there’s every element,” Wiesner enumerates, firing off a list of examples: environmental
economics, toxicology, policy, chemistry, law and engineering.

These resources enable CEINT to “look at every aspect of [nanotechnology’s] implications”—for instance, studying nanomaterials’ effects on organisms at a cellular level. “Plants take up metals, as it turns out, as particles in additions to ions—we didn’t know that,” he tells me. “What might those particles bring along with them? Things can stick to particles.”

CEINT also studies nanotech’s ecosystem-level effects. “We’ve got this whole facility out in the Duke forest, the mesocosms (pictured above), where we can do controlled releases of nanomaterials to see where they go, how fast they get there, and who or what they impact along the way,” Wiesner says with a hint of excitement in his voice. It’s infectious—as he paints me a picture of CEINT’s self-contained testing environment, I can’t help but to feel similarly enthusiastic.

Wiesner sees this research directly shaping the development of new technologies. CEINT’s findings, he says, are essential in “correcting certain trajectories that are not good and hopefully accelerating trajectories of uses of nanomaterials that we think are going to have huge benefits.” A big part of this is organizing their findings into accessible databases like the NanoInformatics Knowledge Commons (NIKC) as a resource for prospective nanotech developers. 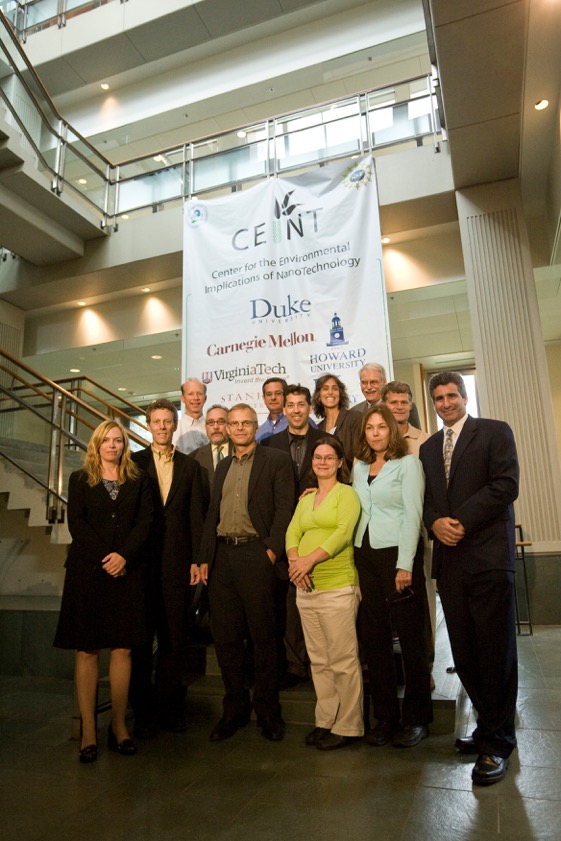 “If you’re paying attention,” Wiesner quips, “you’ll notice that’s ‘Saint Nick.’” And indeed, for those creating the nanotechnology of our present and future, CEINT’s research may indeed be Christmas come early. Understanding risk is a major part of any engineering or business effort.

“Are nanomaterials the next DDT, the next Freon, or not?” he posits. “Is that a reasonable question to ask, even? Does it make sense to talk about all nanomaterials, or should we be talking about categories?”

Nineteen years of research into the nano-world haven’t given us all the answers yet, but talking to Wiesner, it feels like we’re well on our way.

The conversation turns in time to his new role as CEE chair (I force myself to resist geeking out further over the mesocosms). “It’s more of a service
than a promotion,” Wiesner explains to me: a way of giving back to your department. Beyond his self-described role as facilitator, this means shaping
the curriculum to keep up with new developments and remaining competitive.

The interplay between engineering and aesthetics is a particular area Wiesner would like to see more integrated into teaching. “Environment is aesthetics, of course, but when you talk about aesthetics in the engineered concept, it goes all the way to electrical engineers. Steve Jobs and his notion that the iPhone should be a beautiful thing...that’s a concept we need to develop more into the curriculum.”

Integrating modern computational tools is another field Wiesner looks to focus on more. “So much of what was done in the past by cut-and-try...well, you can calculate these things, all the way down to the nanoscale, and then scale that up to the entire structure,” he says. Though much of engineering is already based on such modeling, he believes that we’re capable of far more.

I ask about enrollment; even some Pratt students seem to know relatively little about CEE, the smallest of the engineering departments. Wiesner thinks this has to do in part with CEE’s accessibility to students early on. He sees a single introductory course to each of the degree programs, environmental and civil, as crucial to promoting early undergraduate involvement. It’s also important “that we have really engaging capstone-type experiences, as well as experiences along the way that get into issues like global development and global health.”

But “most critical,” he tells me, is maintaining a close relationship between students and faculty. This extends far beyond the classroom. “Collaboration
is personal,” Wiesner says. “Having a department where students and faculty get together as friends and colleagues, [where] ideas can easily flow and networks can easily form—that’s what a department should do. That’s what a university should do.”

Kyle Baer a freshman pursuing a degree in civil engineering and a certificate in architectural engineering.