With a total of 25 students currently enrolled in the Grand Challenge Scholars Program, many exciting projects are in the works.

Nearly a decade ago, the National Academy of Engineering (NAE) created a list of pressing concerns for humanity to address in the next 100 years— ambitious goals such as reverse-engineering the brain, making solar energy economical, securing cyberspace and providing access to clean water for the 1 billion who currently lack it. These 14 goals became known as the Grand Challenges for Engineering and have served as a guiding force to many engineering questions. Even President Obama picked up on the call to arms, encouraging all philanthropists and institutions to pursue these challenges in his Strategy for American Innovation.

In line with this vision, Tom Katsouleas, at the time dean of Duke University's Pratt School of Engineering; Richard Miller, president of the Franklin W. Olin College of Engineering; and Yannis Yortsos, dean of the University of Southern California's Viterbi School of Engineering, in 2009 proposed a new educational model to prepare engineers to address these challenges that has become known as the Grand Challenge Scholars Program (GCS). The program was launched and endorsed by the NAE, and in 2015, Katsouleas and colleagues led a charge that resulted in a quarter of the nation's engineering deans—representing 122 schools—signing a letter of commitment pledging to establish similar programs at their institutions. The letter was presented to President Obama at the White House in March 2015.

Students apply to the GCS program at the end of their sophomore year. If they are selected, they embark on their journey of integrating research, interdisciplinary ideas, innovation and service into their education. At Duke, these students are also given access to $5,000 in funding to complete their project.

Here are some of our graduating Grand Challenge Scholars. 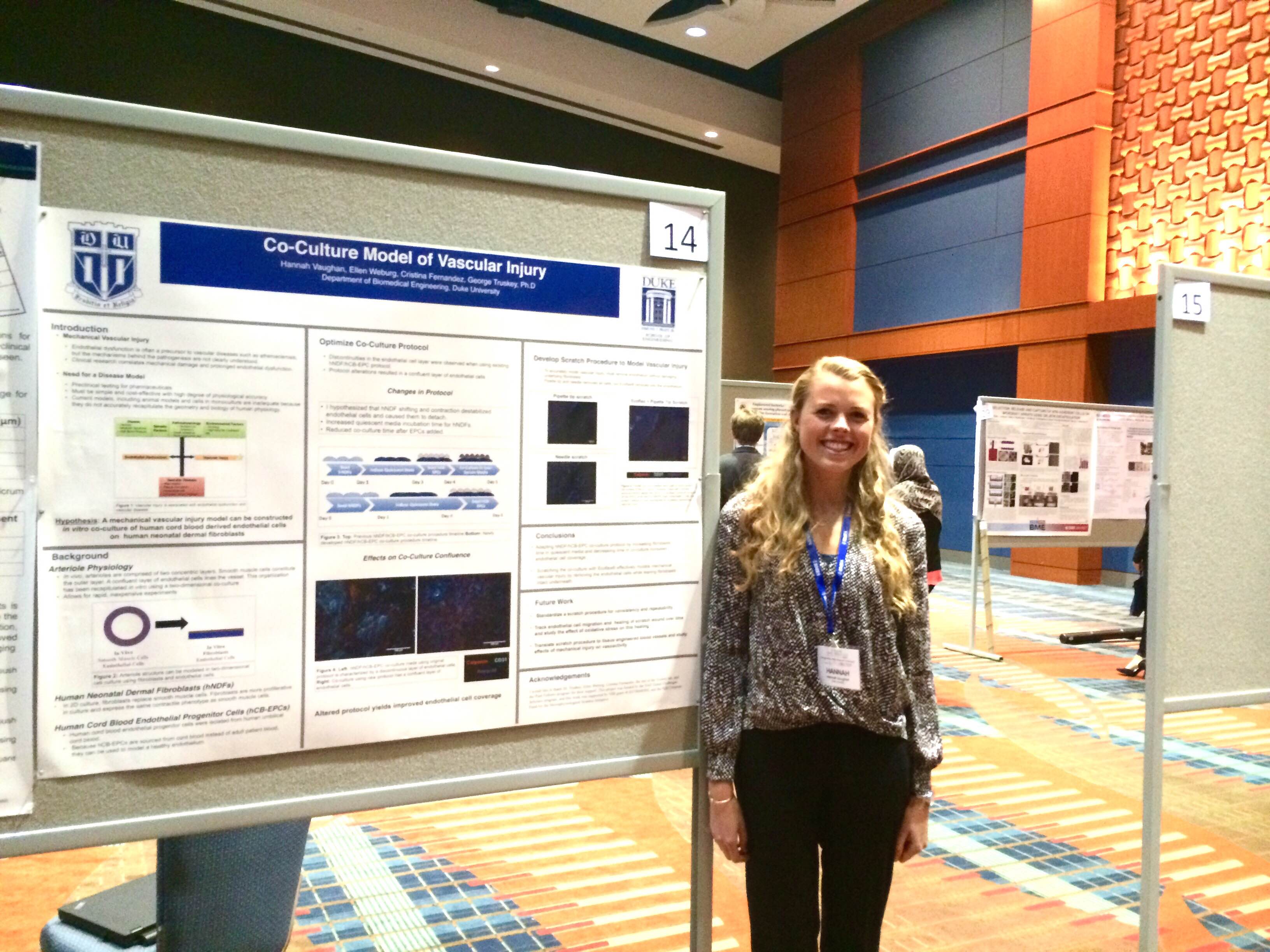 Hannah Vaughan is a senior majoring in biomedical engineering who is working on improving drug development through tissue engineering in the laboratory of George Truskey, the R. Eugene and Susie E. Goodson Professor of Biomedical Engineering and interim dean of the Pratt School of Engineering. Hannah’s involvement in the GCS program has laid the foundations for her career in research, and she intends to matriculate to graduate school this coming year.

For a particular drug to be introduced into the market, it must be tested extensively to ensure the safety of its users. The normal process for drug testing includes a combinationof preclinical animal trials and clinical trials with humans. Many clinical trials fail, however, due to the differences between animals and humans.

The Tissue Chip Project addresses this problem through the engineering of living tissues outside of the human body, hence the term “tissue chip.” In conjunction with this project, Hannah’s research focuses on inducing injury on these 3D-engineered blood vessels and studying the inner lining, known as the endothelial layer.

Endothelial dysfunction inhibits its job of controlling clotting. Various vascular diseases and injuries can be attributed to or result in endothelial dysfunction. A study of vascular injury on engineered tissue outside of the body enables researchers to betterunderstand the mechanisms occurring, thereby allowing them to devise novel drug-testing methods.

Oxidative stress, one of Hannah’s focuses, is thought to cause premature aging of endothelial cells. By simulating this stress in ordinary vessels, Hannah and her colleagues were able to model regions that were prone to atherosclerosis. Mechanical injury, when combined with vascular disease, has been shown to prolong endothelial dysfunction. Hannah devised a mechanical injury model to study endothelial dysfunction in cultured cells. Lastly, she designed a blood vessel matrix from a stronger material known as fibrin. This has allowed researchers to expand the types of cells in these types of experiments. 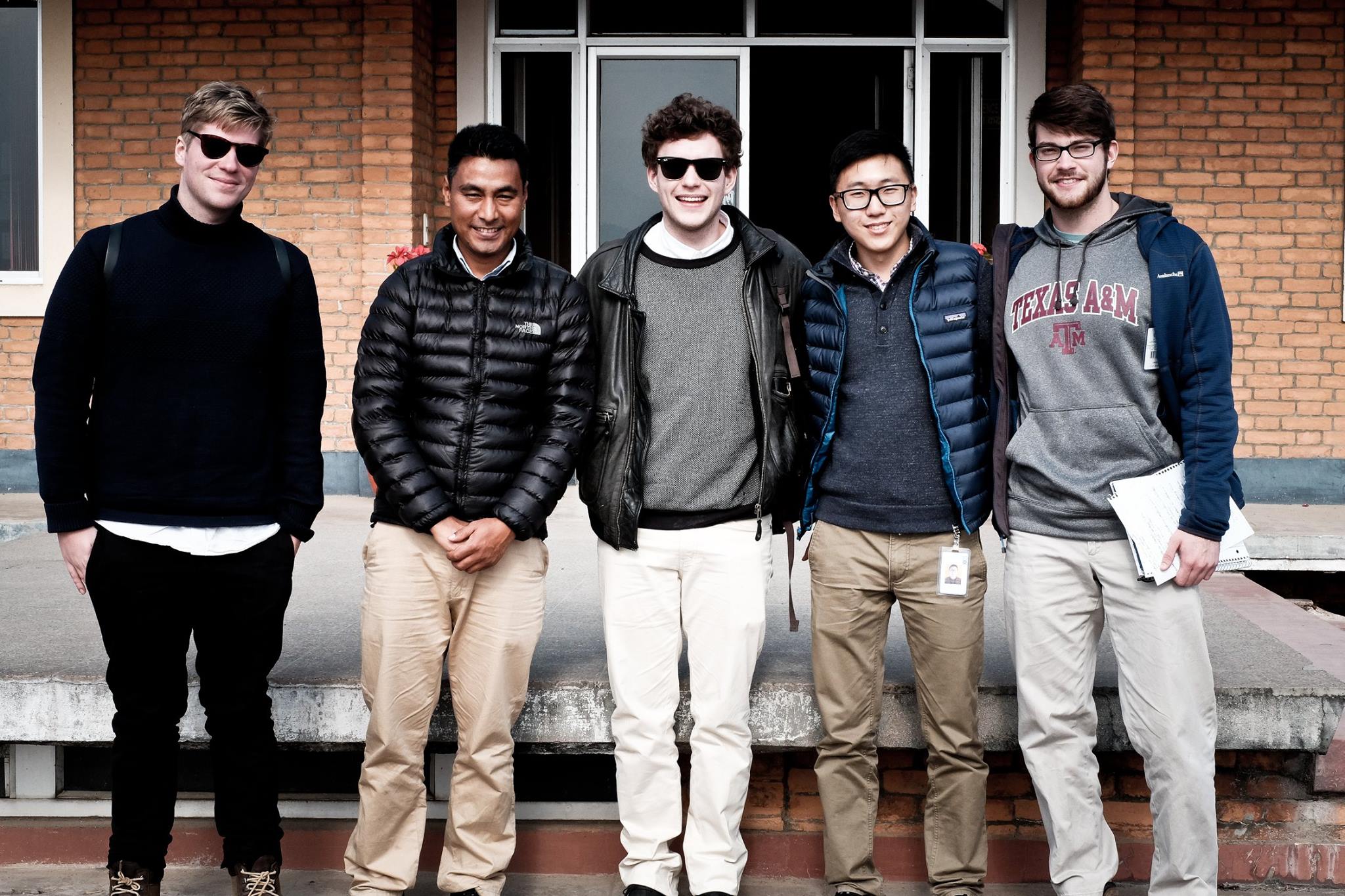 According to the website ViFlex, approximately 700 million people in developing countries cannot obtain glasses, resulting in more than $200 billion in lost economic output annually. In developing countries, the price of glasses for citizens is too high and there are too few optometrists available to prescribe them.

To combat this shortfall, Yitaek and the start-up company ViFlex have developed innovative, adjustable, low-cost glasses that can be distributed in areas in need. He also plans to develop an inexpensive prototype for a device that can prescribe vision correction and is currently researching optic theory and image processing to create this diagnostic device. 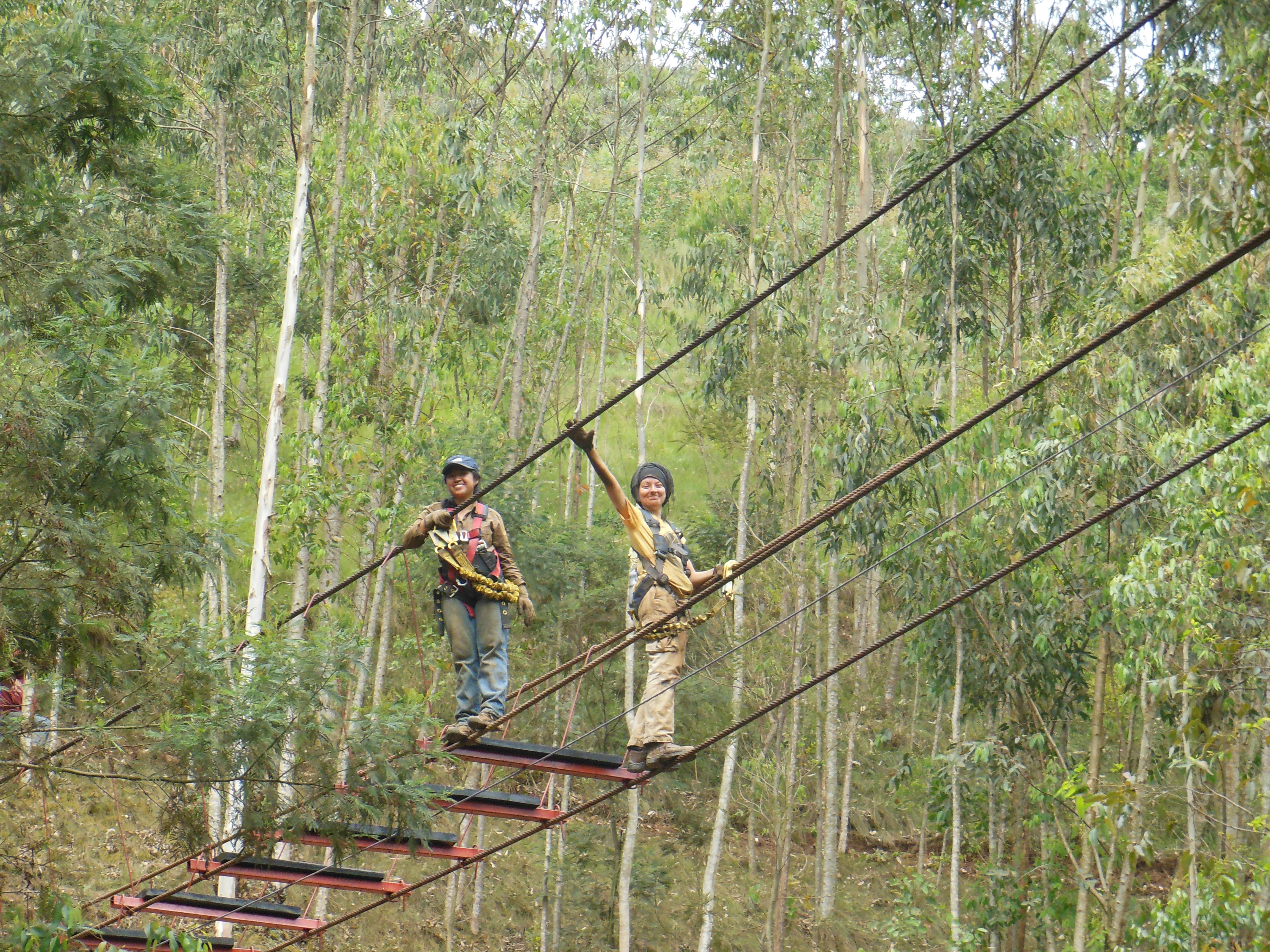 Noura Von Briesen is a senior majoring in civil and environmental engineering. Her project seeks to find ways to counter the negative socioeconomic effects of urban development.

Although urban development projects bring in money and jobs, they can also cause various detrimental effects. For instance, a highway project through an urban district can often induce those who can afford to move away to do so. This removes money and stability from the community, leaving those who cannot afford to move away in an ever-poorer environment without the means to improve their situation. This phenomenon can give rise to poor communi-ties with low graduation rates and high crime rates.

Similarly, if a shopping complex is being built, property values nearby tend to increase, and only those who own their homes or can sustain the rent increase can afford to stay. This process is known as gentrification. Within the Durham community, gentrification is occurring as land is developed, displacing economically disadvantaged residents. There are countless other potential negative effects of urban development, and Noura is shaping her career goals to address these issues.

Noura’s studies focus on remedying gentrification and residential segregation. Her research involves analyzingpolitical entities in relation to their influence in these urban areas. To date, she has concluded that communities must encourage citizens to live in higher-density housing in the city and help raise graduation rates by integrating inner-city school districts with suburban districts.

To supplement her research in urban development, Noura has also traveled on a Duke Engineers for International Development trip, where she assisted in designing and building a bridge for a secluded community in Base, Rwanada. There, she witnessed firsthand the fruits of development such as increased access to water, schools and medical care. 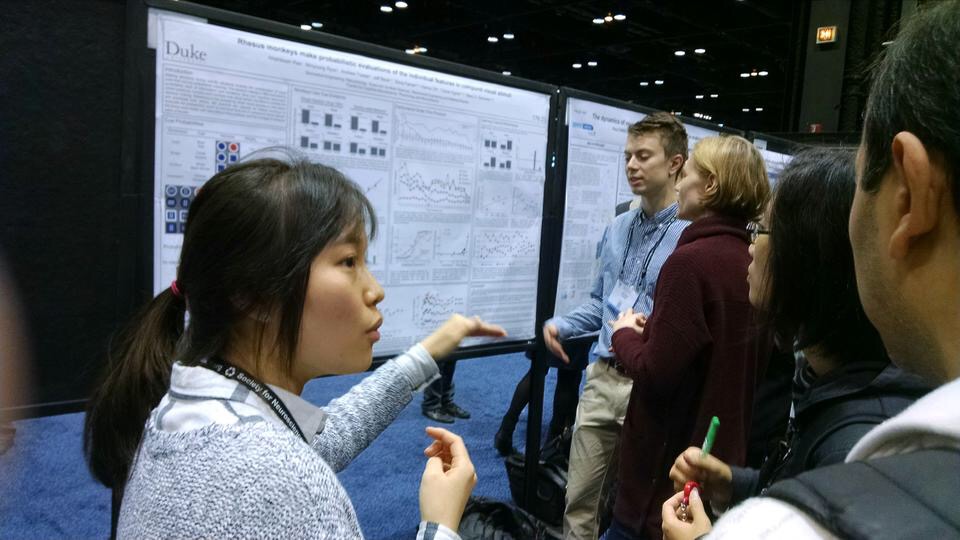 Minyoung Ryoo, a current senior in the laboratory of Marc Sommer, associate professor of biomedical engineering, is researching the computational and neural basis of decision- making. Her main focus of study centers on a particular aspect of decision-making known as heuristics.

Heuristic techniques are employed in times of stress when an individual needs to make a decision with limited time and/or understanding. The process of prioritizing various pockets of information over others is known as satisficing.

To simulate this phenomenon, Minyoung and her team designed an experiment with visual stimuli that constantly vary by shape, color, border color and orientation. With each variable weighted differently, rhesus monkeys watched the display and were rewardedfor choosing the correct cues while researchers recorded their neural output.

From the resulting data, Minyoung and her team concluded that the rhesus monkeys behaved as if they could only employ three characteristics of the stimuli at a time while making decisions, as opposed to humans who can use more than four. They also found that the monkeys did not practice satisficing or heuristic techniques, unlike humans who drop the worst cue when pressure increases.

This experiment has enabled the lab group to further our understanding of decision-making. Minyoung intends to employ this experience by working for a biotechnology company after graduation.

The Grand Challenge Scholars Program has helped direct the creative innovation of Duke’s students and faculty toward today’s most pressing problems. In just a few years, great progress has been made. Groundbreaking research is happening every day at Pratt and other research institutions. Before long, the Grand Challenge Scholars of today will join mankind’s quest for betterment and work to broaden the frontier of understanding.

Ashish Vankara is a freshman on the pre-medicine track majoring in biomedical engineering.