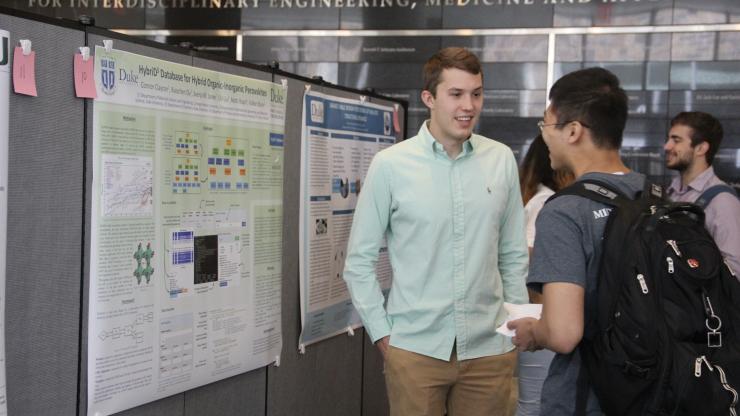 Clayton Connor spent last summer characterizing mineral samples at the Carnegie Museum of Natural History in Pittsburgh—an unusually ambitious use of free time for a rising college sophomore. This summer, to raise the bar a bit, he took a crack at saving the world.

“Within my lifetime, I would like to see a world that runs on sustainable energy,” said Connor.

"Within my lifetime, I would like to see a world that runs on sustainable energy."

Connor is majoring in materials science and engineering and minoring in computer science at Carnegie Mellon University, and was one of nine National Science Foundation Fellows selected to participate in a Duke Research Experience for Undergraduates (REU) focusing on the “Grand Challenges” of 21st century engineering, which include issues like engineering better medicines and preventing nuclear terror. Recruited from universities across the US, the fellows received NSF funding to spend the summer in Duke's hometown of Durham, N.C., where they conducted research alongside Duke Engineering faculty mentors.

Under the supervision of Volker Blum, an associate professor in mechanical engineering and materials science, Connor devoted his summer to research that could make solar energy more economical. He used his knowledge in three academic areas—materials, computer science, and green energy—to help construct an open, online database to store data on perovskites. These crystalline materials offer a cheaper alternative to silicon for use in efficient solar cells; if energy researchers can easily retrieve and compare data on perovskites, they should be able to speed their research and hasten breakthrough developments to make solar energy more affordable on a large scale.

REU Grand Challenges Program co-director Johnna Frierson said she believes the applicability of the research to be one of the program’s main strengths. “The students get to be involved with really impactful, exciting research projects that have importance to society and engineering as a whole,” said Frierson.

"The students get to be involved with really impactful, exciting research projects that have importance to society and engineering as a whole."

The program offers even more than research experience, though. Frierson worked with co-director and Dean of Academic Advising Carmen Rawls to plan summer programming that would give all of the students participating in all of Duke Engineering’s REUs practical knowledge to complement their lab work.

“We want them to know what their career options are and how they can position themselves,” said Frierson. “We want them to walk away knowing that they can put together a competitive package for graduate school.”

Electrical and electronics engineering student Sueda Taner says she came away from her REU with exactly the kind of confidence that Frierson and Rawls were hoping to instill. Taner traveled across the world from her home university in Turkey to work with Associate Professor of Electrical and Computer Engineering Martin Brooke this summer, developing a sonar system for the drone that Duke will use in this year’s Shell Ocean Discovery XPRIZE competition to map the ocean floor. Though she was part of an ECE REU rather than the Grand Challenges REU, she was able to take advantage of the programming that the NSF grant allowed, which was open to all REU engineering participants. She says she found the tips on applying to grad school to be especially important. 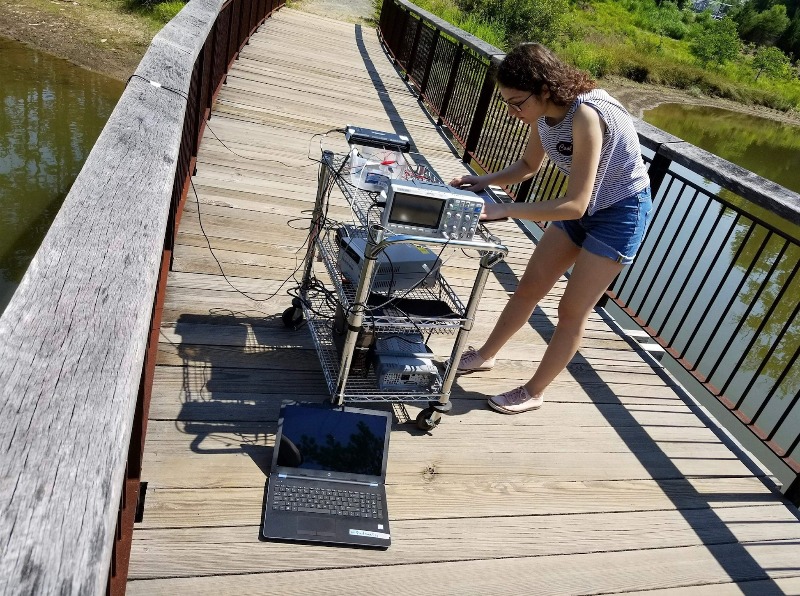 “Before coming to Duke, I was hesitant about pursuing a PhD, but REU at Duke helped me to make up my mind,” said Taner. “I found making contributions to the development of science and engineering extremely satisfying. Achieving this as a woman is even more significant, considering the gender ratios in my department.”

Duke Engineering hosted 32 REU students in total this summer. The experiences culminated in a public poster presentation session held in the Fitzpatrick Center in late July.

Megan Ogle (UNC-Charlotte) won the Grand Challenge REU award and received full funding for registration and travel expenses to present her summer research at the REU Symposium in November.