A new technology to exponentially improve blood-screening for transfusions has leapfrogged its way from Duke University lab to corporate development.

In an unusually streamlined tech-transfer deal, a two-year-old startup company founded by Duke bioengineers was acquired last week by industry giant Immucor, paving the way for the innovation to benefit patients much sooner than usual.

Sentilus, Inc. was founded in 2012 by Ashutosh Chilkoti, professor and chair of biomedical engineering at Duke, and his PhD student Angus Hucknall, based on Chilkoti’s discovery of a way to create a “nonstick” coating that acts as a sort of Teflon for molecules and cells found in blood. Through their startup, the two developed the technology into a microarray that can screen for many blood proteins at once. 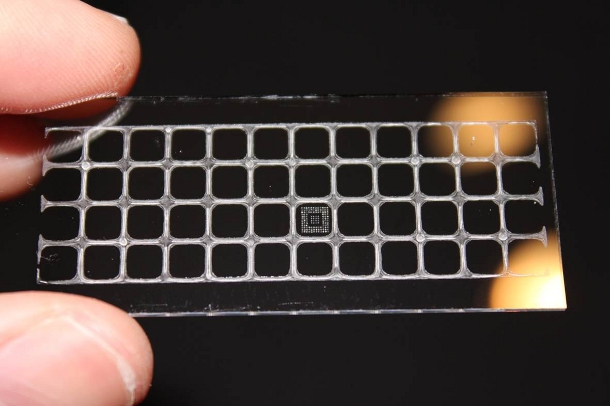 The acquisition by Immucor, a global leader in transfusion and transplantation diagnostics, will help bring the technology to market, with the aim of ensuring that patients in need of blood, organs or stem cells get the right match in a way that is safe, accessible and affordable.

“The technology is very simple and allows us to use an inkjet printer to print antibodies on to this surface,” said Chilkoti. “These antibodies act like Velcro for the blood molecules we are looking for. Nothing else will stick to the plate’s surface. This gives you very good sensitivity—much better than existing technologies.”

With tens of thousands of different proteins found in human tissue, it can be tricky finding just one. Previous platforms have been plagued by unwanted proteins and molecules sticking to the assays, making it difficult to detect low levels of the target proteins amongst the clutter.

Sentilus’s technology creates a surface that no molecule will accidentally cling to, allowing researchers to “see” molecules at levels previously too small to observe by similar methods. And the ability to simply inkjet print the “Velcro” onto the surface makes it easy to mass-produce clinical assays.

The development of the technology was supported for two years by the Duke-Coulter Translational Partnership Grant Program and more recently by a Pilot Program award from the Duke Translational Medicine Institute and by the NIH. The Coulter Award program accelerates the development of promising bioengineering research that addresses important unmet clinical needs.

“We really have to thank the Coulter Program,” said Chilkoti. “That program was meant for development work like this.” Outside of the Duke programs and a NIH grant to Chilkoti, Sentilus was not supported by any other entity—a rarity in the biotech field. Chilkoti and Hucknall did not raise any venture capital and kept the company virtual. Instead of raising capital and investing in physical infrastructure, the duo spent years developing potential applications for their technology.

With the help of intellectual property firm Wilson Sonsini Goodrich & Rosati and through a network of Chilkoti’s contacts, Chilkoti and Hucknall then pitched their idea to potential buyers. While the approach is innovative, it may be a model for other universities and start-up companies, according to their lawyers.

“I suspect this deal may be the first of its kind and I think it might indicate a trend in the future,” said Vern Norviel, the principal lawyer coordinating the technology transfer deal.  “Tosh and Angus bundled it up quite nicely without requiring any brick and mortar space or venture capital. It’s a remarkable way to get the technology out of the university and straight to patients.”