Dean Ravi Bellamkonda and the Pratt faculty awarded more than 500 degrees to undergraduate and graduate engineering students of the Class of 2017. 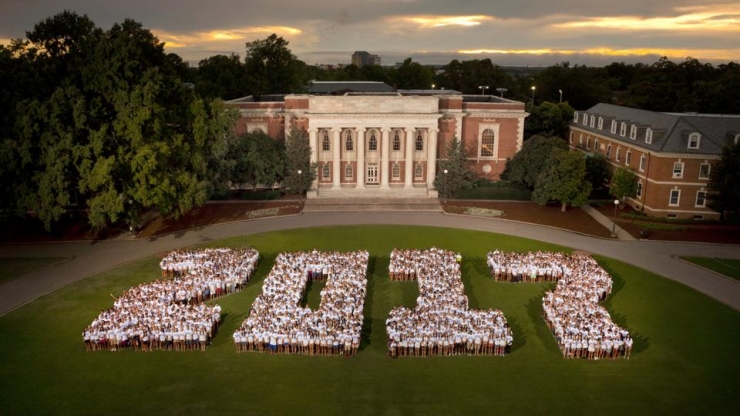 Duke University awarded more than 500 degrees to undergraduate and graduate engineering students on Friday, Saturday and Sunday, May 12 through 14, during a weekend of commencement exercises that began with diploma ceremonies for professional master’s degree students, continued with a university-wide ceremony at Wallace Wade Stadium and concluded with Pratt School of Engineering celebrations in Cameron Indoor Stadium.

Watch video of all Duke Engineering's undergraduate and graduate ceremonies on YouTube. See selected photos from Commencement Weekend on Facebook.

Philanthropist and financier David Rubenstein delivered the university’s commencement address on Sunday morning, while Dean Ravi V. Bellamkonda and senior class president Uzoma Bailey Ayogu spoke at the undergraduate engineering school ceremony held Sunday afternoon. Bellamkonda and the Pratt faculty awarded Bachelor of Science in Engineering diplomas to 296 students (there were 315 students total for the Class of 2017, which includes students who earned degrees during the fall semester).

Overall, Duke awarded degrees to more than 5,300 undergraduate, graduate and professional degrees to students who are graduating this spring. Students who graduated in September or December 2016 were invited to participate in Sunday's ceremony.

Many students were honored with special awards and prizes for outstanding scholarly achievement and student leadership. Their names and the honors they received are listed below.

Aubrey Lynn Presnell – The da Vinci Award
The da Vinci Award is presented to the Biomedical Engineering student with the most outstanding academic record as determined by a faculty committee. The award commemorates the contribution of Leonardo da Vinci in laying the foundations of the mechanistic study of human life.

Anchi Wu, Grace Ying – The Helmholtz Award
The Helmholtz Award is given to graduating seniors who present the best research projects as judged by the departmental faculty. The award commemorates the work of Hermann von Helmholtz in laying the foundation of biomedical engineering.

Daniel Archer Hull – The Theo C. Pilkington Memorial Award
The Theo C. Pilkington Memorial Award was established in 1993 by the Whitaker Foundation as an endowment award in memory of Dr. Pilkington, founding chairman of the Department of Biomedical Engineering at Duke University. The recipient is selected at the end of the junior year and the award is given in recognition of outstanding perseverance and accomplishment in the study of biomedical engineering.

Zachary David Brown – Edward D. "Ned" Light Memorial Award
The Edward D. "Ned" Light Memorial Award is given to a Pratt Research Fellow in biomedical engineering with the best engineering design project as judged by a faculty committee. The award was established in 2012 in memory of Ned Light, who worked for 22 years at Duke, pioneering research in real-time 3D ultrasound imaging and mentoring a host of undergraduate students both in the lab and in life skills.

Rekha Subhashini Korlipara – The Eric I. Pas Award
The Eric I. Pas Award, established in 1998 in memory of Dr. Pas, former director of undergraduate studies in Civil and Environmental Engineering, is presented to the graduating civil or environmental engineering senior judged by the faculty to have conducted the most outstanding independent study project.