Duke University awarded 515 degrees to undergraduate and graduate engineering students on Saturday and Sunday, May 15 and 16, in a weekend of commencement exercises. 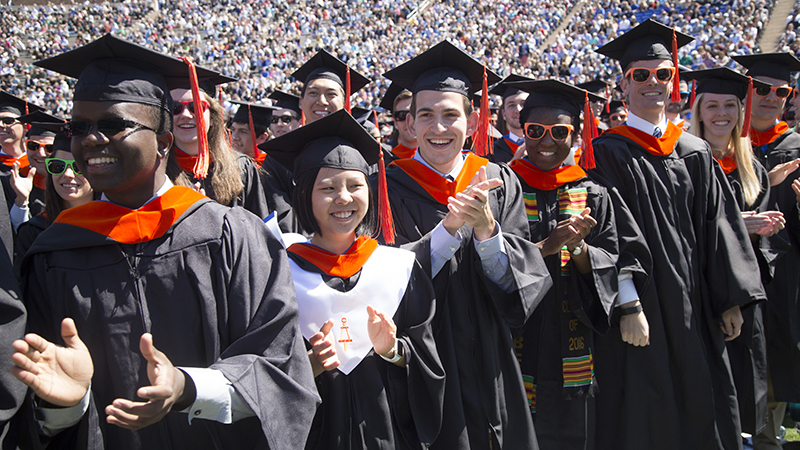 Duke University awarded 515 degrees to undergraduate and graduate engineering students on Saturday and Sunday, May 15 and 16, in a weekend of commencement exercises that began with diploma ceremonies for professional masters degree students, continued with a university-wide ceremony at Wallace Wade Stadum and included Pratt School of Engineering celebrations at Cameron Indoor Stadium.

A special note for the Class of 2016 is that it contains the first Pratt School of Engineering graduates to earn bachelor of science degrees in environmental engineering – Jacob Feldman King and Samantha Rae Thomas.

Browse a collection of profiles of Class of 2016 students, including these new Duke Engineers:

Overall, Duke awarded degrees to more than 5,300 undergraduate, graduate and professional degrees to students who are graduating this spring. Students who graduated in September or December 2015 were invited to participate in Sunday's ceremony.

Jinsu Kim, Chase Raj Singh Malik and Davis Reed Treybig – The Walter J. Seeley Scholastic Award
The Walter J. Seeley Scholastic Award is presented annually by the Engineering Student Government to the member of the graduating class of the School who has achieved the highest scholastic average in all subjects, and who has shown diligence in pursuit of an engineering education. The award was initiated to honor the spirit of academic excellence and professional diligence demonstrated by the late Dean Walter J. Seeley. The ESG hopes that this award will serve as a symbol of the man and the ideals for which he stood.

Jinsu Kim – The da Vinci Award
The da Vinci Award is presented to the Biomedical Engineering student with the most outstanding academic record as determined by a faculty committee. The award commemorates the contribution of Leonardo da Vinci in laying the foundations of the mechanistic study of human life.

Christopher Paul Eckersley and Henian Zhu – The Helmholtz Award
The Helmholtz Award is given to graduating seniors who present the best research projects as judged by the departmental faculty. The award commemorates the work of Hermann von Helmholtz in laying the foundation of Biomedical Engineering.

Jacob Feldman King – The Eric I. Pas Award
The Eric I. Pas Award, established in 1998 in memory of Dr. Eric Pas, former Director of Undergraduate Studies in Civil and Environmental Engineering, is presented to the graduating civil engineering senior judged by the faculty to have conducted the most outstanding independent study project.