Two degrees plus two scan energies and one heavy metal equals a new way to detect dangerous plaques in the coronary arteries.

Jeffrey Ashton, a biomedical engineering graduate student in Duke University’s  MD-PhD program, has won an American Heart Association Fellowship to develop a new contrast agent for CT scans. Not only would the agent be able to detect plaque buildup in arteries, but also reveal how likely the plaque is to rupture and cause a heart attack or stroke.

The  prestigious fellowship, which comes with a two-year, $50,000 grant, is intended to help young researchers launch independent careers in cardiovascular and stroke research by obtaining significant scientific results under the supervision of a mentor.

Or in this case, two mentors. The research is made possible through a collaboration between Jennifer West, the Fitzpatrick Family University Professor of Engineering at Duke University, and Cristian Badea, a professor of radiology at Duke Medicine. 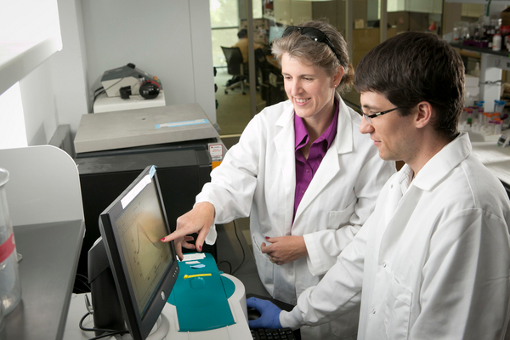 “CT scans are very effective for seeing where there’s a pathology and how big it is,” said Ashton. “But that information can’t accurately predict which plaques pose an imminent risk to the patient.”

A better predictor is the proteases secreted by advanced plaques. Previous research has shown that plaques nearing their tipping point pump out more of these specialized enzymes than typical tissue.

To find plaques and determine their chances of rupturing, the project will use a relatively new technology called dual-energy CT scanning. Aptly named, the technique conducts two scans simultaneously with x-rays of differing energies. This allows doctors to see multiple materials at the same time.

“If we see an atherosclerotic plaque with a normal CT scan, we could do a dual energy CT scan using this new contrast agent to determine the risk,” said Ashton.

The first material the dual energies will light up is iodine, a contrast agent commonly used in CT scans. The second is gold nanoparticles. But the two won’t be jumping into the pool alone; they’ll be joined at the hip.

Ashton plans to connect the two elements using peptides that are easily broken by the proteases secreted by advanced plaques. As the iodine builds up in the plaque, the attached gold nanoparticles will either stay put or break free. The former indicates the plaque is in no danger of rupturing; the latter indicates a need for intervention.

“Working with Cristian has been great because, while we have done a lot of work in contrast agents in the past, we have no expertise in CT scanning technology, and he is one of the world’s leading experts in multi-modal CT imaging,” said West. “By coming together, we’ve been able to translate some of the approaches we’ve used in the past from an optical imaging platform onto a CT platform, which enables many more types of clinical applications.”

For his part, Ashton couldn’t be happier with the situation.

“Even before I started my PhD, I knew I was interested in contrast agents, but I didn’t think anyone at Duke was working with them,” said Ashton. “But rotating through Professor West’s and Professor Badea’s labs, I found that both were interested in the intersection between CT imaging and nanoparticle contrast agent development. It’s been great. I was lucky to find two labs with a need that I could fill, which also happened to be exactly what I was interested in.”