Dowell was recognized for his pioneering contributions to aeroelasticity, structural dynamics, and unsteady aerodynamics

Earl Dowell, the William Holland Hall Professor of Mechanical Engineering at Duke University, has been named this year’s recipient of the American Institute of Aeronautics and Astronautics (AIAA) Reed Aeronautics Award. The award is the highest honor an individual can receive for notable achievement in aeronautics. 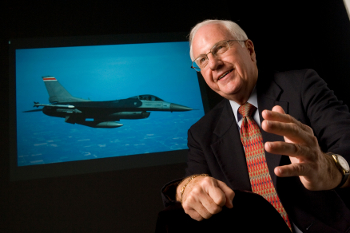 Dowell was recognized for his “pioneering contributions to aeroelasticity, structural dynamics, and unsteady aerodynamics which have had a tremendous influence on aerospace technology.” Along with a certificate and a medal, he was recognized in Washington, DC on Wednesday, June 15, 2016, at the AIAA’s annual Aerospace Spotlight Awards Gala held in conjunction with the AIAA Aviation and Aeronautics Forum and Exposition. The event included the video embedded below.

“Each of this year’s Spotlight Gala Award recipients has distinguished themselves by improving the state-of-the-art in aerospace science and technology. Their work is a testament to the devotion and dedication that each has to their craft,” said AIAA President Jim Albaugh in a statement issued by the AIAA. “Each is worthy of these honors, that are some of the most important awards our community annually gives. AIAA congratulates each of the recipients and looks forward to seeing how they will continue to shape the future of aerospace.”

The AIAA is the world’s largest technical society dedicated to the global aerospace profession. The Reed Aeronautics Award is named after Dr. Sylvanus A. Reed, aeronautical engineer, designer, and founding member of the Institute of Aeronautical Sciences in 1932.