Talking Mechanics Across the Midwest

In a nine-university tour beginning this year, Duke civil engineer John Dolbow will discuss his work developing computational models to predict how material systems will fracture and fail—research that can inform approaches to drug delivery, carbon sequestration and more 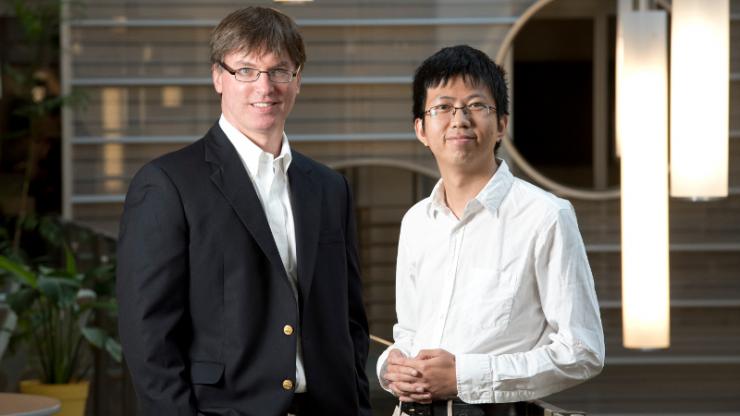 For the past six decades, celebrated mechanics researchers from the world over have toured universities across America’s heartland as part of the Midwest Mechanics Seminar Series. This fall, John Dolbow, professor of civil and environmental engineering at Duke University, will become part of the distinguished tradition, stopping at nine universities to deliver invited lectures on his research into computational models that predict how material systems will fracture and fail.

“The research I’m working on is easy to describe, but the physics involved is incredibly rich,” said Dolbow, who just so happens to be the academic “grandson” of Phil Hodge, who founded the series while a professor of mechanics at the Illinois Institute of Technology. “I’m excited about doing the lectures on the tour and the projects I’ll be discussing in my talks.”

The Midwest Mechanics Seminar Series began as a way for universities to pool their resources to attract notable speakers. Over the years, the seminar series grew in prestige as the number of participating schools grew to 10 at its peak. This year, Dolbow will join a handful of other professors as they split the tour into two week-long stints, with Dolbow’s coming in September and April.

Dolbow’s research focuses on the development of computational methods for nonlinear problems in solid mechanics. In this seminar series, he’ll be speaking about his current National Science Foundation-funded work to model and predict the fracturing behavior of particulate rafts, which was featured on the cover of the September issue of the journal Soft Matter earlier this year.

Particulate rafts are not common vernacular in day-to-day conversations, but chances are you’ve seen one in action. When a large number of floating hydrophobic particles form a thin layer or “raft” on top of a liquid, the forces created by capillary bridges between them cause the group to act like an elastic sheet.

“You can recreate a version of this effect in your own kitchen,” said Dolbow, who is the second Duke faculty member to take part in the lecture series, following in the footsteps of former engineering dean Earl Dowell. “If your grinder is set to the right level of coarseness, you can grind pepper onto water in a small dish and then drop some dish soap in the middle to make the pepper raft break apart. One of our collaborators’ daughters has actually obtained results that are fairly consistent with what we’ve observed in the laboratory.”

Dolbow and his laboratory study the forces and physical phenomena that drive the formation of these fractures. They’ve developed a computer model that can accurately predict how the system will fracture given the specific characteristics of the particles and fluids involved.

The research has many practical applications. Drops of drugs could be encapsulated in a coat of particles to contain them until a specific chemical signal is given to fracture the coating and release the drugs. Underlaying a film of particles beneath oil spills can make them easier to clean up. And the system mimics some of the essential physics behind the fluid-driven crack growth in hydraulic fracturing.

“Just like in our experiments, surfactants are a big part of the liquids used in hydraulic fracturing operations,” said Dolbow. “But are they really necessary? And if so, why do we need them and how do they work? Finding these answers in operations deep underground is difficult at best. Our experiments offer insights into these questions with a much simpler model that we can actually see with our eyes.”