A Day of STEM for Girls 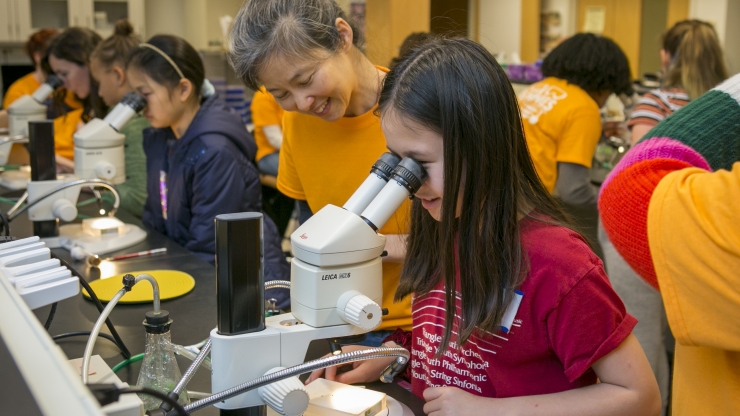 On any average weekday at Duke University, a walk through the Engineering Quad and down Science Drive would yield the vibrant and exciting sight of bleary-eyed, caffeine-dependent college students heading to labs or lectures, most definitely with Airpods stuck in their ears.

But on Saturday, February 22nd, a glance towards this side of campus would have shown you nearly 200 energetic and chatty female and female-identifying 4th to 6th graders from the Durham area. As part of Capstone, an event organized by Duke FEMMES and advised by Duke civil and environmental engineering professor Heileen Hsu-Kim, these students spent the day in a series of four hands-on STEM activities designed to give them exposure to different science, technology, engineering, and math disciplines.

FEMMES, which stands for Females Excelling More in Math, Engineering, and Science, is an organization comprised of Duke students with the aim of improving female participation in STEM subjects. Their focus starts young: FEMMES uses hands-on programming for young girls and hosts various events throughout the year, including after-school activities at nearby schools and summer camps.

Capstone was a day of fun STEM exposure divided into four events stationed along Science Drive and E-Quad—two in the morning, and two in the afternoon, with a break for lunch. Students were separated into groups of around eight, and were led by two to three Duke undergraduates and a high school student. The day started bright and early at 8:45 A.M with keynote speaker Stacy Bilbo, Duke professor of Psychology and Neuroscience.

Bilbo explained that her work centers around microglial cells, a type of brain cell. A series of slides about her journey into a science career sparked awe, especially as she remarked that microglial cells are significant players in our immune system, but scientists used to know nearly nothing about them. Perhaps most impactful, however, was a particular slide depicting microglial cells as macrophages, because they literally eat cellular debris and dead neurons.

A cartoon depiction of this phenomenon generated a variety of reactions from the young audience, including but not limited to: “I’m NEVER being a doctor!”, “I wish I was a microglial cell!”, “Ew, why are brains so gross?”, and “I’m so glad I’m not a brain because that’s SO weird.”

Even in 2020, while fields like medicine and veterinary science see more women than men, only 20% of students that earn bachelor’s degrees in physical sciences, math, and engineering disciplines are female. What accounts for the dramatic lack of female participation in STEM disciplines? The reasons are nuanced and varied. For example, according to a 2010 research report by the American Association of University Women, girls tend to have more difficulty acquiring spatial thinking and reasoning skills—all because of the type of play young female children are more likely to engage in.

This creates a chicken-and-egg story: girls don’t enter STEM at the same rate as their male counterparts, and as a result, future generations of girls are discouraged from pursuing STEM because they don’t see as many accomplished, visibly female scientists to look up to. Spaces like Capstone which encourage hands-on activity are key to exposing girls to the same activities that their male counterparts engage in on a regular basis – and to exposing girls to a world of incredible science and discovery led by other females.

After Bilbo’s talk, it was off to the activities, led by distinguished female professors at Duke—a nod to the importance of representation when encouraging female participation in science. For example, one of the computer science activities, led by Susan Rodger, taught girls how to use basic CS skills to create 3-D interactive animation.

An introduction to categorizing different minerals based on appearance was led by Emily Klein, while one of the medicine-centered activities involved Duke EMS imparting first aid skills onto the students. 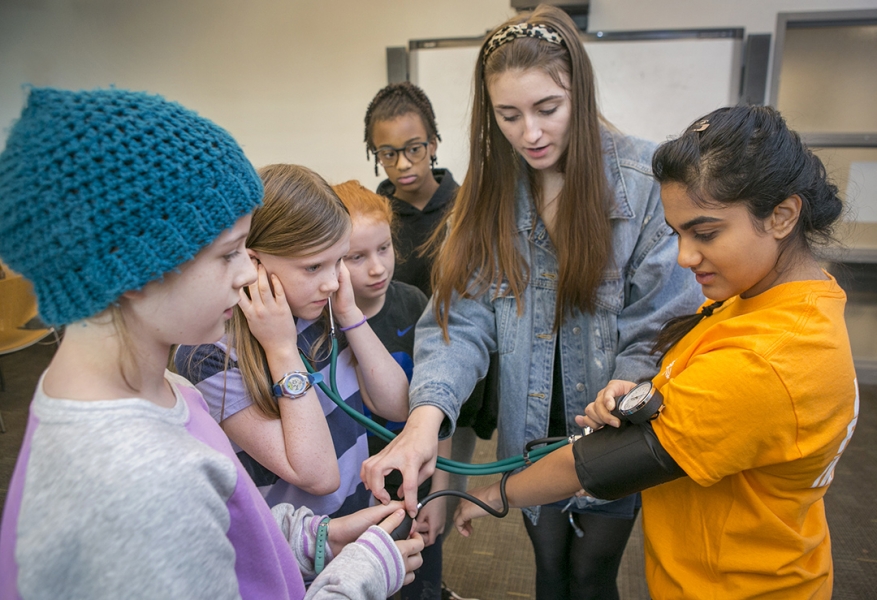 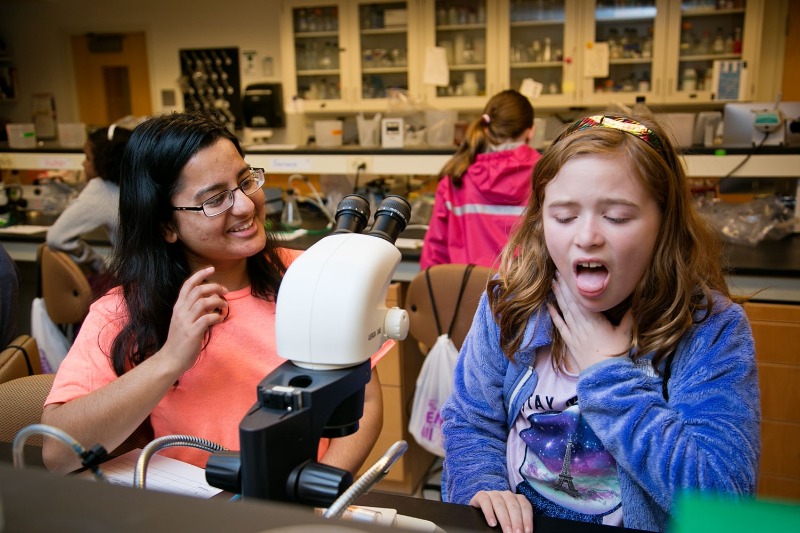 For one of the biology-themed activities, Nina Sherwood and Emily Ozdowski (dubbed “The Fly Ladies”) showed students fruit flies under a microscope. The activity clearly split the group: girls who stared in glee at unconscious flies, shrieking “It’s SO BIG, look at it!” and girls who exchanged disgusted looks, edging their swivel chairs as far as physically possible from the lab benches. Elizabeth Bucholz, a Biomedical Engineering professor, led one of the engineering activities, showing students how CT scans generate images using paper, a keychain light and a block (meant to represent the body). In math, meanwhile, Shira Viel used the activity of jump-roping to show how fractions can untangle the inevitable and ensuing snarls.

The day definitely wasn’t all science. During lunch in LSRC’s Love Auditorium, most groups spread out after scarfing down pizza and spent intense focus over learning (and recording) TikTok dances, and when walking down Science Drive under blue and sunny skies, conversations ranged from the sequins on someone’s Ugg boots to how to properly bathe one’s dog, to yelling erupting over someone confidently proclaiming that they were a die-hard Tar Heel.

A raffle at the end of the day for the chance to win Duke merchandise inspired many closed eyes and crossed fingers (“I want a waterbottle so bad, you have no idea!”) And as newfound friends said goodbye to each other and wistfully bonded over how much fun they had at the end of the day, one thing was clear: events like Capstone are crucial to instilling confidence and a love of STEM in girls.