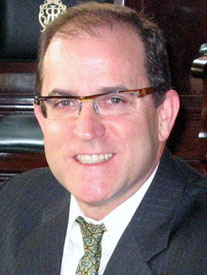 The most important skill I gained was working with people. I learned how to better work in groups and how to plan ahead.

For most of his life, Danal Blessis was rooted to the East Coast of the U.S. He lived in North Carolina since the sixth grade, graduating from Duke in 1982 with a civil engineering degree in 1982, followed by 13 more years in his first career stop.

Back then, the School of Engineering had not yet been named for Edmund Pratt, and during an introduction to computer course, Blessis created computer programs by punching out holes on a sheet.

A lot has changed since then, especially Blessis’ unexpected road to working in Hong Kong.

He is now the manager of knowledge management at MTR Corporation, a public transportation railway. Blessis is involved with planning all the company’s future railway projects and expansion work. He helps manage the construction and expansion plans so that they go smoothly.

There is great importance for railway transportation in Hong Kong, since the mountainous terrain limits the amount of roads that can be constructed, Blessis said. Also, railways provide a much more sustainable and environmentally friendly alternative to the area. Currently, he is working on a 60-kilometer expansion of the railway that will connect Hong Kong to the high-speed network in China.

Blessis credits Duke for providing him with a very broad education, which helped him find his future career.

“The most important skill I gained was working with people. I learned how to better work in groups and how to plan ahead. Those are the sorts of things that become most important once you get out into the work field.“

After college, Blessis worked for 13 years and moved up through the ranks at Carolina Power and Light, until he and his wife decided to move to Hong Kong. The big change in location came down to three deciding factors—“to have a chance to gain an international experience, continue to pursue our careers and save money, and to be able to travel.”

Even though Blessis is halfway across the world, he is now more involved with the Duke community than ever before.  He remains connected with the university by working with the Alumni Academic Admissions Council chair and by serving as president of the Duke Club of Hong Kong, where he interviews prospective students. Blessis said he’s benefited a lot through his involvement with Duke.

“I’ve gained a lot of friends and a lot of meaningful personal relationships. Seeing such smart high school seniors applying to Duke, and being able to stay in touch with them is really rewarding.”

Although Blessis’ career is rooted in new technology, he believes that face-to-face interaction will always be the best method of communicating. Although technologies like smart phones, e-mail and social media sites help keep everyone connected from a distance; in-person communication will always be the best way to maintain meaningful relationships.

“People are getting sick of sitting at a computer; it doesn’t replace the face-to-face communication. It is important for schools to continue to teach valuable people skills. And it’s critical for us to share our knowledge.”