Cicadas Get a Jump on Cleaning

As cicadas on the East Coast begin emerging from their 17-year slumber, researchers at Duke University and James Cook University have figured out one of the mysteries surrounding these bulging red-eyed insects -- namely how they keep their wings clean.

The researchers have shown that dew drops can be beneficial not only in cleaning cicada wings, but other water-repellant surfaces. On these so-called superhydrophobic surfaces, dew drops “jump” by themselves, carrying away the contaminants. 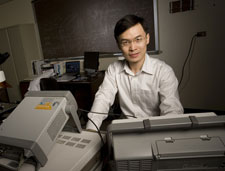 A team led by Chuan-Hua Chen, Alfred M. Hunt Faculty Scholar and assistant professor of mechanical engineering and materials science at Duke’s Pratt School of Engineering, demonstrated that tiny particles such as pollen can be removed from cicada wings by a phenomenon he has described as jumping droplets. When growing dew drops coalesce together, the merged drop jumps off water-repellant surfaces. The jumping motion is automatic, powered entirely by the surface energy initially stored in the dew drops.

“The ability of water-repellant surfaces to self-clean has conventionally been attributed to rain droplets picking up dirt particles,” Chen said. “For this conventional wisdom to work, rainfall must be present and the orientation has to be favorable for gravity to effectively remove the rain droplets. These limits severely restrict the practical use of self-cleaning superhydrophobic surfaces.”

“We have found, however, that the self-propelled jumping motion of the dew drops is very effective in dislodging contaminating particles, regardless of the orientation,” Chen said. “These new insights can help guide the development of man-made surfaces that are not dependent on any external forces and are therefore truly self-cleaning.”

The results of Chen’s research were published online in the journal Proceedings of the National Academy of Sciences. Katrina Wisdom, a Duke undergraduate and a Pratt Research Fellow in Chen’s lab at the time of this study, was the paper’s co-first author. 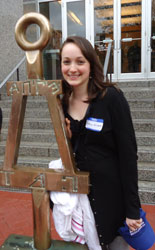 Read more about her here.

Cicadas are flying insects typically a few inches long. The most common species emerge on a yearly basis, with some U.S. species emerging every 17 years. When they dig out from underground as nymphs they molt, shedding their skin to reveal their wings. They then take flight as full-grown cicadas, spending the next four to six weeks flying around searching for and attracting mates with their distinctive song. After depositing eggs in the ground, the cicadas die and cycle begins anew.

Cicada wings are characterized by rows and rows of tiny bumps or domes of various heights and widths (like upside-down ice cream cones, with the conical tips projecting upward). When a water droplet lands on this type of surface, it only touches the points of the bumps, creating pockets of air underneath the droplet. The droplet is kept aloft by this cushion of air, much like a puck in an air-hockey game.

Using a specially designed high-speed video imaging system, the engineers captured the jumping water droplets on a cicada wing, as well as the associated self-cleaning processes.

“Most cicadas are unable to clean their own wings because of their short appendages,” said Gregory Watson of James Cook University. “Furthermore, these insects commonly live in areas where there is little rain over an extended period of time. However, the areas are humid, which provides the tiny dew droplets needed to ‘jump clean’ their wings.”

“These findings point to an alternative route to achieve self-cleaning which is fundamentally different from the conventional wisdom involving rolling or colliding droplets on a superhydrophobic surface,” Chen said. “Self-cleaning surfaces using the jumping-drop mechanism can work at any orientation, which is a huge advantage for applications with unfavorable orientations with respect to gravity, such as mobile electronics and building roofs.”

Chen’s research is supported by the National Science Foundation, the Defense Advanced Research Projects Agency and the North Carolina Space Grant. Other members of the team were Duke’s Xiapeng Qu and Fangjie Liu, as well as James Cook’s Jolanta Watson.