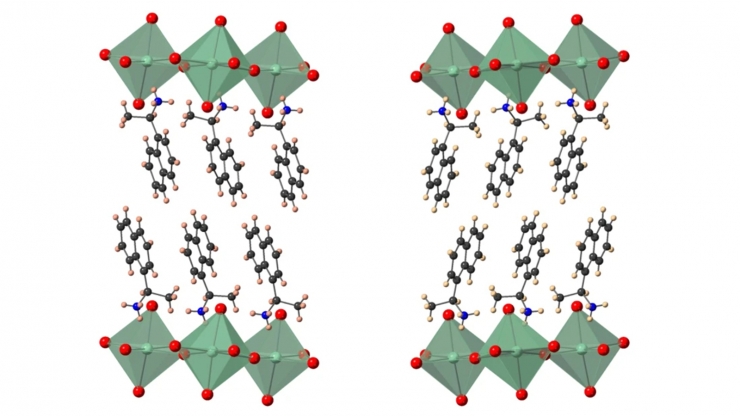 Materials scientists at Duke Engineering, working with a nationwide group of collaborators in the Department of Energy-funded "Center for Organic Inorganic Semiconductors for Energy" (CHOISE), are transforming a class of semiconductors containing both organic and inorganic components into a candidate for futuristic “spintronic” computers by introducing chirality into their structure.

Derived from the ancient Greek word for handedness, the term chiral simply refers to structures that are similar, but that can’t be translated or rotated to match each other. Take your hands, for example. When placed one on top of the other, your left hand does not fit on top of your right hand, even though they’re otherwise identical structures.

Known as hybrid organic-inorganic perovskites or HOIPs for short, the semiconductors featured in the demonstration have traditionally been popular targets for light-based devices such as solar cells and light-emitting diodes (LEDs).

The hybrid organic-inorganic piece of the name refers to combining the strengths of organic and inorganic materials. Organic materials have more desirable optical properties and may be bendable, but can be ineffective at transporting electrical charge. Inorganic structures, on the other hand, are typically better at conducting electricity and offer more robust mechanical strength.

The final piece of the puzzle, perovskite, refers to the material’s specific atomic structure, no matter which elements are part of the recipe. And because these crystals or films can be structurally complex, researchers are combining their organic and inorganic components in well-ordered layers, which makes their frameworks and resulting properties somewhat easier to rationalize.

In a new paper published on September 24 in Nature Communications, researchers demonstrate the first members of this class of hybrid semiconductors in which a targeted chiral molecule transfers its “handedness” from the organic molecule to the inorganic part of the structure and also show that this transfer enables control over the spin-related character of the semiconductor electronic bands.

“Building the HOIP with a layer of chiral cations, which can either be left- or right-handed, breaks the symmetry of the surrounding inorganic framework of the material,” said David Mitzi, the Simon Family Distinguished Professor of Mechanical Engineering and Materials Science at Duke. “This provides a ‘handle’ to tailor the spin states within the material.”

While this discovery is fascinating on its own, it also leads to the possibility of using these types of materials in electrical devices. Depending on the chirality of the organic molecule used, the material will favor the transport of electrons with one type of spin or the other, which could enable so-called spintronic devices.

“By breaking the structural symmetry within the inorganic layers, we brought about a phenomenon known as Rashba-Dresselhaus spin-splitting,” said Manoj Jana, a materials science post-doctoral researcher at Duke and first author of the paper. “This is not a very common phenomenon, and is especially rare in this class of materials called HOIPs.”

In the new paper, rather than focusing on how these materials create electricity with light, the researchers use their structural characterization techniques and advanced computational models to understand how the HOIPs interact with electrons based on the direction of their spin. They show that when the organic component of the material is made from a selected chiral molecule, the surrounding inorganic framework also becomes chiral, connecting the spatial direction in which an electron is transported to its spin direction. This phenomenon, Rashba-Dresselhaus spin-splitting in the inorganic framework, can have implications for spintronic devices, including spin field-effect transistors and spin-Hall devices.

In traditional electronics, information is transported, stored, and manipulated based on the movement of the charge of electrons. This requires a substantial amount of energy and produces a lot of heat. Alternatively, spintronics creates 1s and 0s by manipulating the spins of stationary electrons. Devices using such a setup would have better signal speeds and require less power because the spin is the signal rather than the charge.

While chiral organic molecules have been introduced into perovskites previously, the structural transfer of chirality from organic to inorganic components has not been studied. And while spin-splitting has long been demonstrated in two-dimensional electron gases, semimetals and metals, the ability to control this effect in HOIPs has remained elusive.

With this demonstration, the researchers hope to advance one possible path toward such devices.

“The materials used for the first hybrid perovskite solar cells were invented in the 1970s by a German laboratory that just wanted to study their properties to see what they could do,” said Volker Blum, associate professor of mechanical engineering and materials science at Duke, who led the computational modeling side of the research. “It wasn’t until 40 years later that someone got the idea to use them for a solar cell. In many ways, that’s what we’re doing here with chiral induced spin selectivity.”