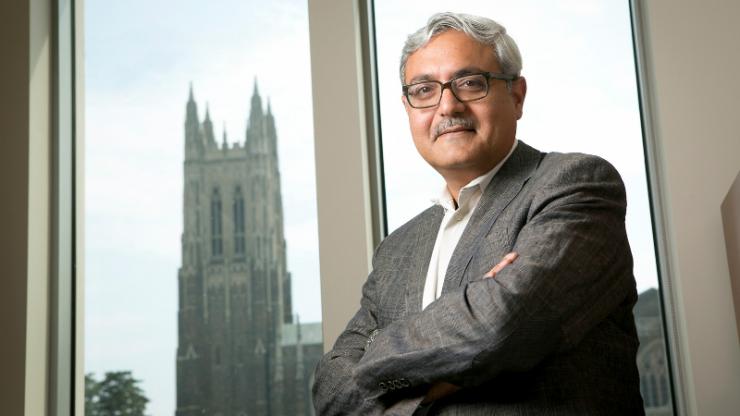 Ashutosh Chilkoti has been reappointed as chair of Duke’s Department of Biomedical Engineering (BME), and will hold a new five-year term through June 2022.

Chilkoti has served as chair of Duke BME since August 2014, leading the department through a period of continued growth and development. In the coming years, Chilkoti plans to build on the department’s efforts to recruit exceptional junior and senior faculty while creating a close-knit culture that provides the support necessary for them to excel.

“Tosh Chilkoti is an accomplished scholar, inventor and prolific scientist who ranks amongst the best-known biomedical engineers in the country,” said Ravi Bellamkonda, Vinik Dean of the Pratt School of Engineering, in announcing the appointment. “As chair, Tosh has hired amazing faculty, built community within BME, and embraced design and entrepreneurship as signature aspects of our BME program at all levels. I’m pleased that he has agreed to serve another term as the leader of one of Duke University’s signature programs.”

In his next term as chair, Chilkoti plans to continue his focus on hiring junior faculty that immediately contribute to the department as well as competing with the nation’s best engineering schools for exceptional senior faculty. He wants to continue to build community through the initiatives he has started, such as regular gatherings, celebrating accomplishments and working to improve mentoring skills.

“The most important things to a department are its people and its culture. As a department grows, there’s a sort of centrifugal force that tends to separate faculty members into groups,” said Chilkoti. “I’ve worked to start a number of small initiatives that have brought the department into a cohesive team and created an environment that supports success.”

Chilkoti also plans to support the translation of research discoveries into entrepreneurial endeavors by opening a Duke BME start-up incubator in the Chesterfield Building in downtown Durham. The incubator will provide laboratory and office space to students, faculty and alumni when it launches early next year.

Chilkoti sees such efforts as an extension of Duke’s mission of providing service to society, as the most powerful way to affect people’s lives is through new products.

“There comes a time in everyone’s career where, if you’re able to give back to the people who have helped you succeed, you should,” said Chilkoti, who joined Duke’s faculty more than two decades ago. “In the past three years, there have been a lot of changes and we have built positive momentum. I want to continue that by providing stability and completing some of my initiatives in my second term.”

Chilkoti, the Theo Kaganov Professor of Biomedical Engineering and professor in Mechanical Engineering & Materials Science and Chemistry, is an internationally recognized biomedical engineer and one of the most-cited researchers in materials science and engineering.

Elected to the National Academy of Inventors in 2016, he is a serial entrepreneur who has launched four companies based on his work, bringing to market innovations such as an insulin delivery system for diabetics that reduces injections from once a day to once a week, a point-of-care immunoassay, and novel nanoparticle delivery systems for cancer therapies.

Among Chilkoti’s additional recent honors are the Pritzker Distinguished Lectureship Award from the Biomedical Engineering Society, the Clemson Award for Contributions to the Literature from the Society for Biomaterials, and the Humboldt Senior Researcher Award from the Alexander Von Humboldt Foundation.

“The best thing about Duke BME are the people – the students, staff and faculty,” said Chilkoti. “It’s a great place to work because everyone takes a lot of pride in their teaching and research efforts, and I want to help make it even better.”