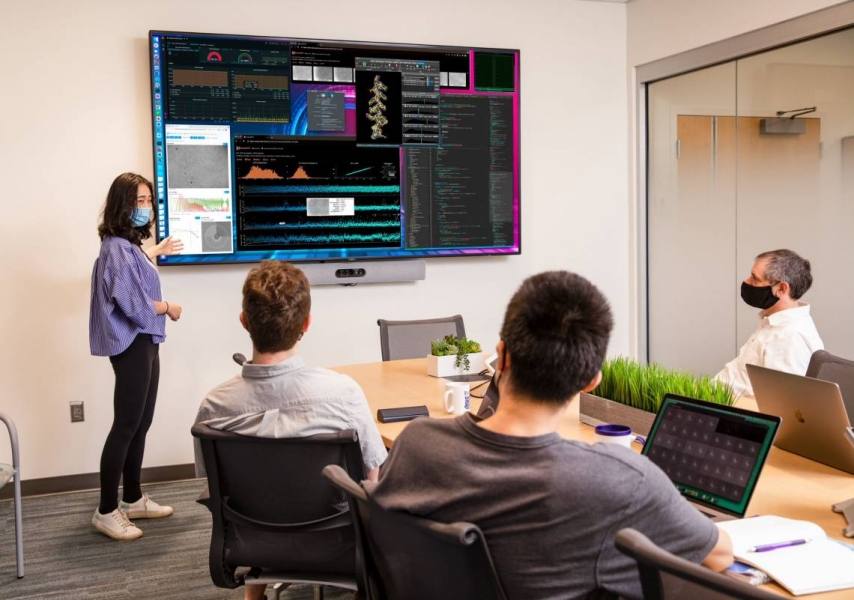 Duke’s expertise in Cryo-EM microscopy has attracted a nearly $700,000 grant from the Chan Zuckerberg Initiative (CZI) that will support an effort to make this Nobel-prize winning technology do even more.

Cryo-EM is a powerful way to visualize the shapes and configurations of individual proteins, said Alberto Bartesaghi, an associate professor of computer science, biochemistry, and electrical and computer engineering, who spearheads the new effort. After taking thousands of pictures of purified protein, the system uses software to assemble a view of the protein’s shape.

Duke scientists however have begun working with a 3-D approach called tomography, in which the protein sample is rotated. “It’s like a CT scan,” Bartesaghi said. And the group has already dramatically increased the speed of making these images.

But a protein in isolation is sort of like one letter in an otherwise unseen – and enormous -- alphabet. What does it connect to? Where do you find it? How is it used?

With the 2-1/2-year CZI funding, Bartesaghi’s team will be developing new software based on artificial intelligence that will be able to sort out the shapes of individual proteins as they are found within the crowded interior of a cell. Seeing them in place should give researchers more knowledge about a protein’s functions and interactions.

They’ll be using an AI approach called “multi-task learning,” to find specific proteins within a volume of cellular material. Normally Cryo-EM software de-noises the data, then segments it, then detects the shapes. The new approach would do all three steps at the same time allowing it to reach higher precision.

It is a form of ‘semi-supervised,’ artificial intelligence, said Bartesaghi, who joined Duke in 2018 from the National Institutes of Health. “You give it some examples and then the computer learns to refine what it is seeing.”

“Ultimately, these advances will allow the visualization of molecules in their native environment at unprecedented levels of detail, helping to realize the promise of visual proteomics,” the group said in their project application to CZI.