A Better Way to Measure the Stiffness of Cancer Cells 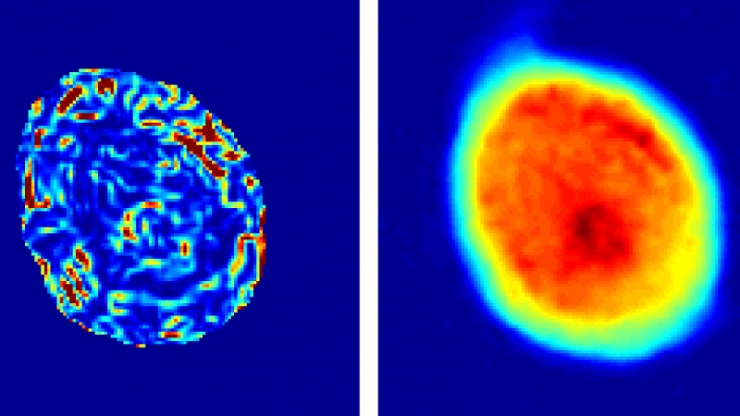 Biomedical engineers at Duke University have discovered a way to detect signs of cancer on a cell-by-cell basis using two lasers and a camera.

Several medical devices currently in use and in clinical trials around the world look for increases in cellular stiffness as an indicator of cancerous tissue. These devices, however, rely on readings from many cells clustered together within the body and cannot operate on a cellular level.

In a study published online Feb. 28 in the Biophysical Journal, researchers describe a technique for assessing an individual cell’s stiffness using patterns that appear within its internal structure. The results show that the more organized its innards, the stiffer the cell.

In previous work, Adam Wax, professor of biomedical engineering at Duke, showed that a cell’s internal structures shift as fluids flow around its exterior.

“Think of a cell as a large Jell-O mold with a lot of fruit suspended in it,” said Wax. “If you blow on it really hard with compressed air, everything is going to move in the direction of the air a little bit.”

Wax also showed that he could calculate cellular stiffness by measuring the amount of that shift. This discovery had many advantages over traditional methods of measuring the rigidity of a single cell. For example, no physical contact with the cell was required and measurements took much less time.

“Traditional approaches like atomic force microscopy take all day just to prepare a single sample,” said Will Eldridge, a PhD student in Wax’s lab and first author of the paper. “Using a moving liquid to measure shear flow only takes 30-40 minutes to image a group of cells.”

Still not satisfied with that timetable, Wax and Eldridge tried to find a visual metric that could do the same job in less time. In the new paper, they show that the amount of disorder found within a cell’s internal structures directly correlates to its stiffness.

To measure cellular disorder, the researchers shine a laser through a cell and compare it to a second, unobstructed beam. The differences in the amount of time it takes for the two lasers to travel through the sample are then analyzed to produce a picture, revealing just how disordered the cell’s internal structures are.

To prove their idea worked, the group measured these “phase disorders” in five different types of live cancer cells just before measuring their stiffness using the already proven “Jell-O mold” technique. As hoped, the two metrics were highly correlated.

“The speed of this technique is only limited by the size of your camera’s field of view,” said Eldridge. “You could potentially measure hundreds of individual cells in a matter of seconds.”

More work is needed to determine the exact relationship between the two measurements, but Wax is hopeful that the technique could be translated into a new biomedical device for cancer screening.

“It’s widely known that cellular stiffness is an indicator of cancer, but there’s no viable diagnostic tool that can use that knowledge on a cellular scale,” said Wax. “With this technique, I can see a path to creating a high-throughput system that could quickly and easily screen for cervical, esophageal or colon cancer—anywhere you could take a tissue scraping.”

This work was supported by the National Science Foundation (CBET 1604562).