For the millions of people forced to rely on a plastic tube to eliminate their urine, developing an infection is nearly a 100 percent guarantee after just four weeks. But with the help of a little bubble-blowing, biomedical engineers hope to bring relief to urethras everywhere. 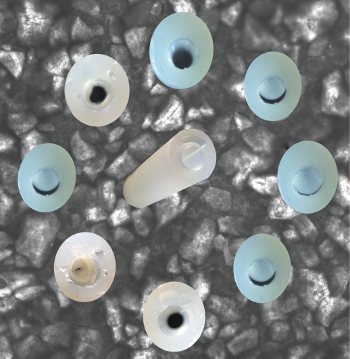 About half of the time, the interior of long-term urinary catheters become plagued by biofilms—structures formed by colonies of bacteria that are extremely difficult to kill. Once established, it is only a matter of time before the biofilm becomes a welcoming host for other, more dangerous bacteria or begins to choke urine drainage, causing leakage—or even trauma to the patient’s body.

Duke University engineers have developed a new urinary catheter design that can eliminate nearly all of the hard-to-kill biofilm from the catheter’s walls. Instead of focusing on expensive antibacterial coatings, the researchers use physical deformation to knock the infectious film from its moorings.

“A biofilm is like a city that protects and harbors harmful bacteria,” said Vrad Levering, a PhD student in biomedical engineering. “Our solution is like an earthquake that demolishes the infrastructure, leaving the rubble to be easily washed away by a flood of urine.”

Outside of the hospital, catheters are also commonly required by paralysis victims and the immobile elderly. And with an aging population, the use of catheters is likely to increase in coming decades.

For years, researchers have focused on developing antimicrobial treatments to stop the formation of biofilms, but as the statistics indicate, they have yet to find an affordable, effective solution. Besides the costs and technical challenges, many doctors fear antimicrobial solutions would promote the evolution of antibiotic-resistant superbugs.

So Duke engineers decided to think outside of the cylinder.

“We ran experiments showing that if you stretch an elastic piece of rubber at a proper rate, you can pop various types of sticky biofilms right off of its surface,” said Xuanhe Zhao, professor of mechanical engineering and materials science, whose team partnered with that of Gabriel Lopez, professor of biomedical engineering.

“Those tests were initially aimed at cleaning submerged surfaces in marine environments, but the principle has many possible applications,” continued Lopez. “So we thought, why not catheters?” 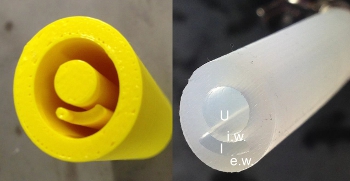 Their first model features a single channel that can be inflated with liquid or air running parallel to the main urinary tract, with nothing but a thin, flexible barrier between the two. Pushing liquid through the small inflation channel forces the thin wall into the urinary tract while leaving the outer dimensions of the catheter intact.

A prototype molded from a 3D printed form worked beautifully, Levering said. The sudden deformation unseated more than 90 percent of the biofilm, which was washed away by a flow matching the slow movement of urine. Biofilm on the wall opposite the inflation channel was mostly unharmed, but the collaborative team has plans to produce a new prototype with inflation channels running along both sides of the main channel.

Lopez believes the demonstration is a clear proof-of-principle that their simple mechanical solution could revolutionize the catheter industry. Because the design would have low implementation costs, closely adheres to the dimensions of current catheters and would be easy for medical clinicians to operate, the team hopes to bring it to market and is currently searching for partners.

“There are more than 30 million of these used every year,” said Levering. “And for a technology that has changed very little in 50 years, the problem is kind of atrocious. We hope we have found a solution.”

Levering said the general concept has potential applications for a wide range of industries currently plagued by biofilms, such as dairy processing, petroleum transport, city drinking water and heat exchangers.

“We don’t want to get in over our heads, but there are lots of other places where biofilms are severe problems,” said Levering. “It’s a multi-billion-dollar-per-year problem for sea water filtration alone. There are definitely other potential markets out there.”