Nimmi Ramanujam is showing that light can be a powerful tool for making cancer diag- nosis faster and treatments more effective. 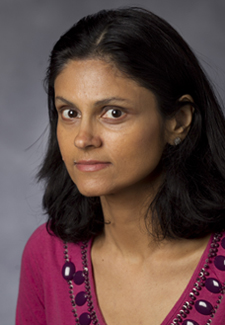 To identify cancerous tissue in the breast, for example, Ramanujam’s team shines non-ionizing white light between the visible and ultraviolet wavelengths into breast tissue after it has been removed from the body. Photons from the light either scatter throughout the tumor or are absorbed as they come into contact with optically detectable cancer biomarkers, such as blood oxygenation levels, beta-carotene concentration, and collagen content.

While white light can’t penetrate deeply into tissue, it’s a useful diagnostic tool, especially for areas that can be penetrated non-invasively, such as the breast, mouth, nasal cavity, or cervix, said Marlee Junker, a research analyst in Ramanujam’s lab. “It’s non-destructive, simple to use, and it doesn’t require us to use any large and expensive instrumentation.”

To translate the technology into clinical practice, Ramanujam founded the company Zenalux in 2006 with funding from one of the first Duke-Coulter Translational Partnership grants. With their flagship product, Zenalux reduced the large instruments from Ramanujam’s lab to a 4-by-5-by-9 inch form factor. The Zenascope is a small spectroscopy system packaged into a convenient console and equipped with a single-channel, pen-like probe designed to be held in the fingertips and the Monte Carlo feature extraction algorithm. Future generations of the device will be able to self-calibrate to adjust for lamp fluctuations and have pressure-sensing capabilities that capture measurements the moment a specified pressure is achieved.

Once in place, the probe shines light on the tissue and collects the reflectance spectrum. The algorithm converts the reflectance into the intrinsic ab- sorption and scattering of the sampled tissue. The algorithm is employed in real-time, so the team is able to view the quantified endpoints during an experiment. The process takes milliseconds to complete, allowing for real-time data analysis—for example, enabling surgeons performing breast-conserving surgery to check whether they’ve removed all the cancerous tissue during surgery.

Ultimately, Ramanujam anticipates that this technology will allow physicians to give patients a bedside, real-time diagnosis, while increasing accuracy and reducing unneeded surgeries. The team is currently testing whether the probe can accurately diagnose cervical cancer in Haitian women.