All photos courtesy of Connor Guest

Before Duke engineering students could build a suspension bridge across the upper headwaters of the Nile this summer, they had to learn to communicate with their Rwandan partners. Unfamiliar with the local dialect of Kinyarwanda, they got to know the community of Cyohoha, Rwanda by sharing smiles and meals before learning each other’s languages through gestures and songs. 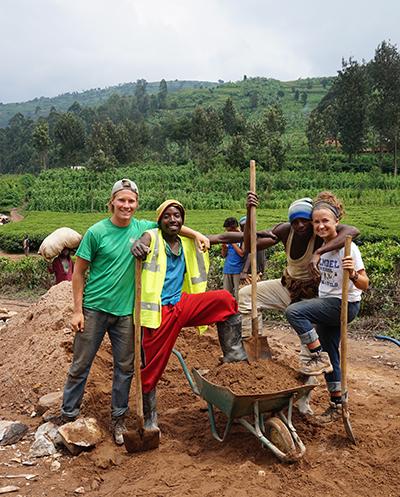 Despite language barriers, with only eight weeks to build a bridge across the Nyabarongo River, the group quickly learned to operate as a cohesive team. The nine Duke undergraduates, part of student organization Duke Engineers for International Development (DEID), joined forces with Rwandan engineers, Bridges to Prosperity professionals and local volunteers to link villages on either side of the river.

The bridge was a welcome sight to the nearly 5,000 people living in the surrounding areas who will now rely on it to access schools, markets and medical facilities. Cyohoha’s previous bridge, which supported about 1,000 crossings each day by schoolchildren, patients seeking medical care, farmers herding cattle, businesspeople carrying large loads, and other community members, had no side barriers and couldn’t stand up to the region’s seasonal floods, making it dangerous and sometimes impossible to cross.

The Rwanda project’s co-lead from Duke, mechanical engineering major Caroline Ayanian, said the previous bridge deteriorated almost completely within weeks of their arrival. The new bridge they helped build, she said, should remain sturdy for the next 20 years, and the students returned with lessons and friendships that will last just as long. 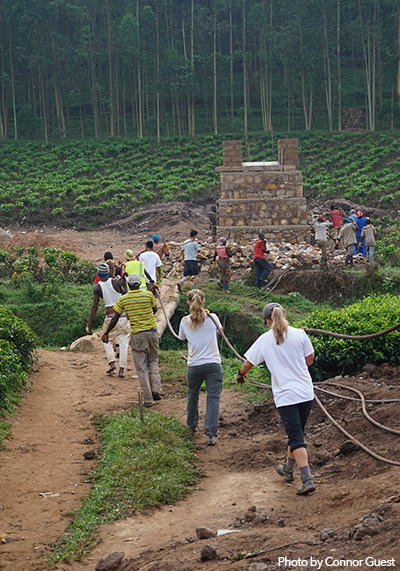 “These projects change the traveler in so many ways that it’s hard to describe,” he said. “From an academic standpoint, it’s invaluable to have that hands-on experience and to understand how things change on the fly, but there’s also the human aspect—understanding the world you’re serving as an engineer.”

Tobin also co-led a group this summer in Honduras, where six DEID members worked to implement a safe system for filtering gently used water from wash basins and returning that water to the environment.

Leading up to their international projects, DEID students worked with faculty advisor Dr. David Schaad and other faculty mentors and graduate students to design their projects. Most groups then partnered with local organizations to identify community needs and implement appropriate solutions.

Tobin’s group joined forces with Un Mundo, an international development organization working in rural El Pital, which taught the students about the local area and connected them with key community members and project leaders.

Other DEID groups this summer constructed clean cook stoves in Costa Rica, built a primary school in Uganda and began cleaning up a creek here in Durham.

While the groups hope to have made a lasting impact on the communities in which they worked, those communities have also instilled in the students a sense of what it means to belong to a global community.

“You see this way of life,” Tobin said, “and you start to understand the problems the world is facing—problems that you, as the rising generation, have been tasked to solve.”