By Braden Welborn of the Duke Energy Initiative 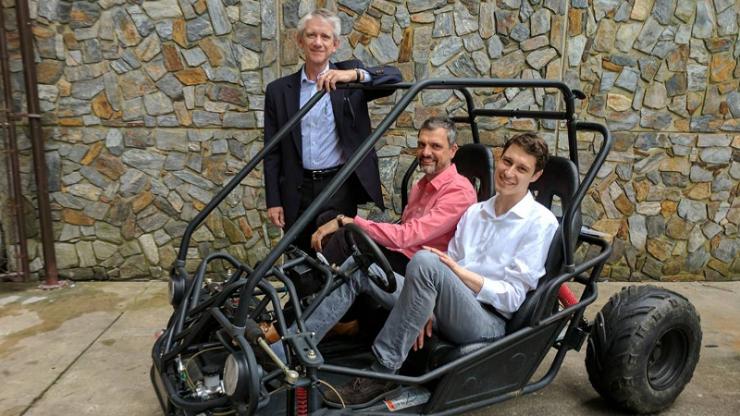 Neuroscientists tend to be power-hungry. While the 110-volt outlet behind your desk produces a current of about 20 amps of electricity, the magnetic fields used in noninvasive brain stimulation draw about 5,000 amps -- roughly the same amount required to power a ship. Neuroscientists can't exactly plug into the wall for that kind of juice, so they need strong, reliable and safe electronic circuits.

A few years ago, spurred by conversation with School of Medicine and Pratt School of Engineering colleague Angel Peterchev, who has appointments in psychiatry and behavioral sciences, electrical and computer engineering, biomedical engineering and neurosurgery, a question began to nag at Goetz: Could this same technology solve the battery woes of electric vehicles?

Today's EVs have large battery packs—the bottom of the car is filled with high-voltage batteries, as well as a range of electronics necessary for conversion of DC power to 12-volt power (for features like entertainment systems, air conditioning or GPS) and three-phase power (for the electric motor).

"In most situations when you're using electricity," Goetz said, "you'll have a power source and then electronics to reshape the current, constantly switching on and off before it goes to your device." A traditional EV battery pack always emits at its full voltage—400 volts—and rapidly switches off and on to produce the appropriate volts and amps of electricity.

"Today's electric vehicles do have extensive and reliable safety monitoring systems to address the high voltage and highly reactive chemistry of the battery packs. Still, I think we'd all agree it's worth exploring alternative approaches that take those risks off the table," Goetz said.

When Goetz and other Duke researchers proposed applying their power conversion approach from neurosurgery to grid-storage and mobility applications, the U.S. Department of Energy responded along the lines of "We're very interested, but we need to see something concrete," Goetz said.

So Goetz and Peterchev turned to Duke University's Energy Research Seed Fund, which supported them and Pratt School of Engineering professor Josiah Knight to develop a prototype for the battery and converter system.

In a competitive grant process, the Energy Initiative and other on-campus partners annually award up to $40,000 seed funding to five to eight multidisciplinary teams for energy research.

The seed funding helped Goetz and team develop their ideas enough that the National Science Foundation awarded the team and colleagues based at the FREEDM Systems Center at North Carolina State University a $500,000 grant to develop new control systems that would allow electric vehicles to make the most of the new battery approach.

The Duke team's approach streamlines the amount of electronics required for conversions, and modularizes the battery. Their circuit arranges 16 small packets of batteries (each with up to 40 volts) so that the output follows a sinuous wave -- peaking and subsiding. The switches combine the small packets dynamically to reconfigure the battery at very high speeds, activating each of the pancake-sized packets in series or parallel.

The Duke team's approach can generate outputs at higher quality, with greater efficiency, and at lower cost than traditional EV batteries. And modularizing the battery into small packets of 40 volts can also improve safety. Finally, the approach can reduce wear on the motor and other components.

Goetz points out that Knight's contributions have been critical. "In electric vehicles, the electronics do become the heart of the vehicle—but that heart can't function unless it's working in coordination with the rest of the body. Josiah's expertise helps us treat the project holistically."

"We are hoping to compete with this machine in the urban-concept category at the Shell Eco-marathon Americas next year," said Knight, who advises the Duke EV team.

The NSF funding is also letting the team explore applications of the battery approach to solar energy systems. 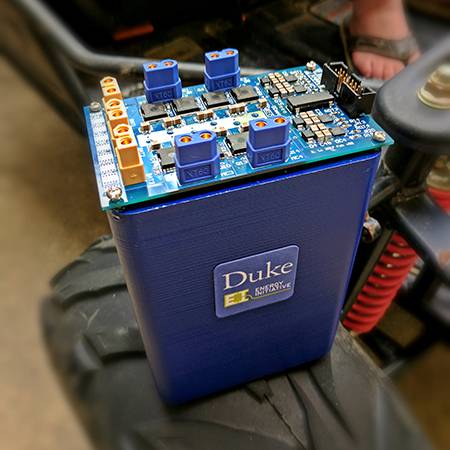 In most solar homes, electronics are installed to convert the energy captured by those cells then emit it in 110-volt alternating current that is in sync with the power grid. But what about nighttime and cloudy days?

Many companies market storage systems that “bridge” periods of night and shade, but they usually consist of a loose set of solar cells, electronics, battery packs, and separate electronics that convert from the battery to the grid.

“The flow of energy is hardly efficient—and a cloud or small shadow on just one cell can come close to shutting down your whole system,” Goetz said. “But we’ve realized that by incorporating a battery pack very similar to what we’ve developed for EVs, we can get the maximum out of the cells with shadows while continuing to draw on the full power of the other cells. The structure allows us to integrate energy storage with little additional effort,” he said. “That generates maximum impact: feeding into the grid and integrating batteries with no extra electronics.”

Goetz’s and Peterchev’s work also crosses over with Pratt professor Jeff Glass’s exploration of solar cells that are flexible film with electronics and battery printed on the same material. Their potential collaboration is in its early stages, but Goetz is excited about the possibilities.

“With film you can flex it and integrate it, and have a very cheap solar battery, a systeOncm with everything integrated,” Goetz said. “So we’re trying to make the electronics fit with those flexible processes, so that we have something that could be used anywhere in the world, relatively cheaply.”

Goetz and graduate student Chris Dougher also teamed up to enter Duke University’s Startup Challenge with a business plan for their “Perle Converter,” which emerged from the research supported by the Energy Research Seed Fund and the NSF grant.

The modular multilevel series and parallel converter uses low-voltage semiconductor switches to take a DC input and create an AC output while connecting the power sources dynamically in series and in parallel. It was awarded the Startup Challenge’s Clean Energy Prize for 2017, which was sponsored by the Energy Initiative.

Dougher and Goetz are targeting electric vehicle, solar energy, and battery storage markets. They estimate that current domestic demand for converters exceeds 2.1 million—and is projected to jump to more than 8.3 million by 2019. Dougher is pursuing a Master of Environmental Management (MEM) at the Nicholas School of the Environment and a Master of Business Administration (MBA) at the Fuqua School of Business.

“My research has taken so many unexpected turns through collaboration at Duke—and I love that,” says Goetz. “It’s very intentional, how this university brings people together across disciplines to work on important problems like energy. And it’s a strategy that helps make Duke researchers’ work stronger and more actionable.”