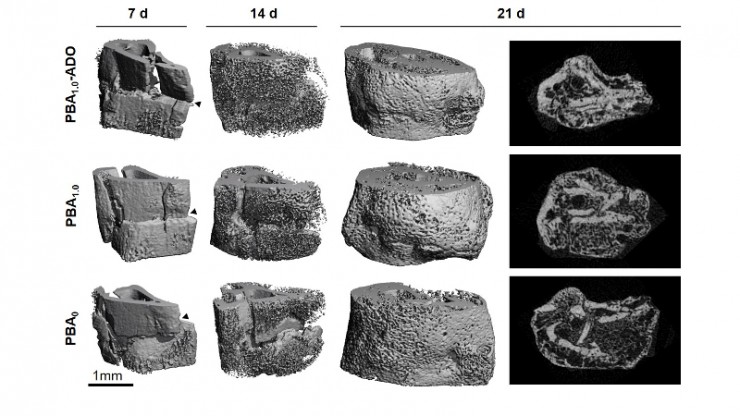 Researchers at Duke University have engineered a bandage that captures and holds a pro-healing molecule at the site of a bone break to accelerate and improve the natural healing process.

In a proof-of-principle study with mice, the bandage helped to accelerate callus formation and vascularization to achieve better bone repair by three weeks.

The research points toward a general method for improving bone repair after damage that could be applied to medical products such as biodegradable bandages, implant coatings or bone grafts for critical defects.

The results appear online on December 12 in the journal Advanced Materials.

In 2014, Shyni Varghese, professor of biomedical engineering, mechanical engineering and materials science, and orthopedics at Duke, was studying how popular biomaterials made of calcium phosphate promote bone repair and regeneration. Her laboratory discovered that the biomolecule adenosine plays a particularly large role in spurring bone growth. 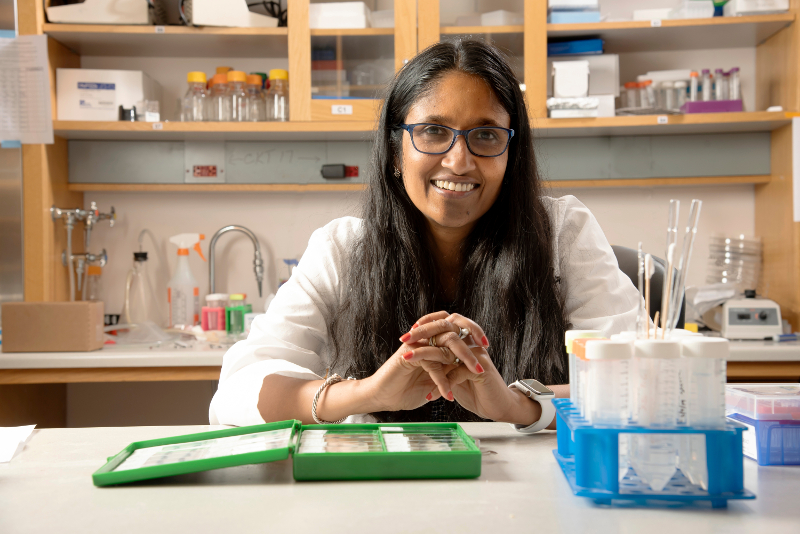 After further study, they found that the body naturally floods the area around a new bone injury with the pro-healing adenosine molecules, but those locally high levels are quickly metabolized and don’t last long. Varghese wondered if maintaining those high levels for longer would help the healing process.

But there was a catch.

“Adenosine is ubiquitous throughout the body in low levels and performs many important functions that have nothing to do with bone healing,” Varghese said. “To avoid unwanted side effects, we had to find a way to keep the adenosine localized to the damaged tissue and at appropriate levels.”

Varghese’s solution was to let the body dictate the levels of adenosine while helping the biochemical stick around the injury a little bit longer. She and Yuze Zeng, a graduate student in Varghese’s laboratory, designed a biomaterial bandage applied directly to the broken bone that contains boronate molecules that grab onto the adenosine. However, the bonds between the molecules do not last forever, which allows a slow release of adenosine from the bandage without accumulating elsewhere in the body.

In the current study, Varghese and her colleagues first demonstrated that porous biomaterials incorporated with boronates were capable of capturing the local surge of adenosine following an injury. The researchers then applied bandages primed to capture the host’s own adenosine or bandages preloaded with adenosine to tibia fractures in mice.

After more than a week, the mice treated with both types of bandages were healing faster than those with bandages not primed to capture adenosine. After three weeks, while all mice in the study showed healing, those treated with either kind of adenosine-laced bandage showed better bone formation, higher bone volume and better vascularization. 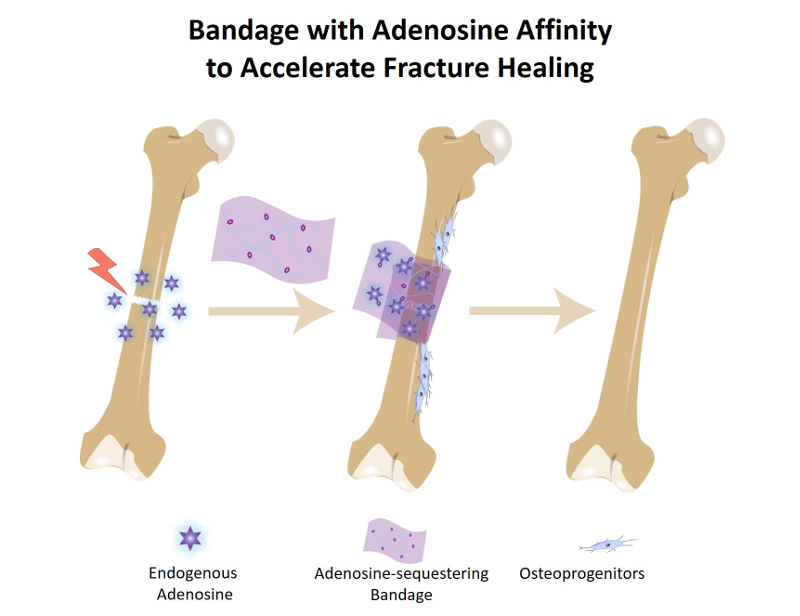 The results showed that not only do the adenosine-trapping bandages promote healing, they work whether they’re trapping native adenosine or are artificially loaded with it, which has important implications in treating bone fractures associated with aging and osteoporosis.

“Our previous work has shown that patients with osteoporosis don’t produce adenosine when their bones break,” Yuze said. “These early results indicate that these bandages could help deliver the needed adenosine to repair their injuries while avoiding potential side effects.”

Varghese and Yuze see several other paths forward for biomedical applications as well. For example, they imagine a biodegradable bandage that traps adenosine to help heal broken bones and then decomposes into the body. Or for osteoporotic patients, a permanent bandage that can be reloaded with adenosine at sites that suffer from repeated injuries. They also envision a lubricating gel armed with adenosine that can help prevent bone injuries caused by the wear and tear associated with reconstructive joint surgeries or other medical implants.

“We’ve demonstrated that this is a viable approach and filed a patent for future devices and treatments, but we still have a long way to go,” said Varghese. “The bandages could be engineered to capture and hold on to adenosine more efficiently. And of course we also have to find out whether these results hold in humans or could cause any side effects.”