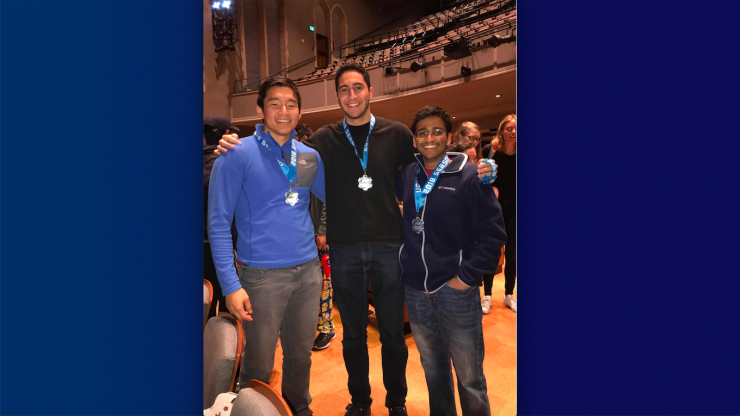 Jason Liu, Jay Gupta, Faris Albarghouthi and Manav Avlani won first prize in the Health and Wellness track during the 2017 HackDuke competition. During the event, which included more than 400 students from over 20 schools nationwide, the team was recognized for their work on an automated microarray image processing software that will improve access to point-of-care diagnostics in developing areas.

As undergraduate students studying biomedical engineering (BME), Liu, Gupta, Albarghouthi and Avlani used the hackathon to create software that can be deployed with a novel diagnostic test they helped develop in the lab of Ashutosh Chilkoti, the chair of BME. The diagnostic test––called the D4 assay–– is a point-of-care assay that can be inkjet-printed onto glass slides. After a sample is placed on the side and allowed to sit for a determined reaction period, researchers then insert the slide into a smartphone attachment to read the results, which are presented via bright fluorescent quantum dots against a dark background.

Due to the use of a unique non-stick polymer coating on the surface of the test, the D4 assay can run sensitive, ELISA-like tests with the speed and portability of lateral flow tests, making it an ideal platform to use in resource-limited settings. But despite these advantages, the lack of a fast and automated image-processing script still limited wide use of the tool.

The BME team addressed this issue during HackDuke by developing an application to use in tandem with the D4 assay that can successfully detect spot locations from the quantum dot results, calculate the average fluorescence intensity of each spot, plot the data, and then compute a graph from which unknown sample values can later be determined to quantify biomarker concentration. These advancements both shorten and automate the image-processing capabilities of their application, bringing it one step closer to being used alongside the D4 assay in clinical field trials.

HackDuke is one of the largest student hackathons in the Southeast, and it distinguishes itself from similar events by requiring all projects to accomplish a social or civic good. These projects are sorted into various tracks, including inequality, health and wellness, education and energy and the environment.