Junior Karen Xu was one of 240 recipients of the award, selected from a field of over 1200 nominated mathematics, science and engineering students nationwide. 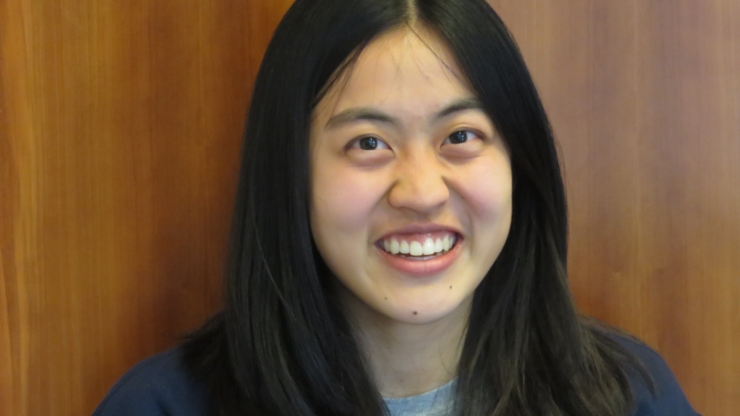 Karen Xu, a junior in Duke University’s Pratt School of Engineering, has been named a 2017 scholar by the Barry M. Goldwater Scholarship and Excellence in Education Program. Xu and fellow Duke junior John Lu are among 240 students to be selected for the highly competitive scholarship.

The Goldwater Scholars were chosen from a field of 1,286 nominated mathematics, science and engineering students from around the U.S. Intended to honor the late U.S. Senator Barry Goldwater, the scholarships are designed to foster and encourage outstanding students who are pursuing careers in natural sciences, engineering and mathematics. A majority of these students aim to obtain a PhD, and the one-and two-year scholarships go toward covering the cost of tuition, housing, and school materials for the year.

Xu, originally from Manassas Park, Virginia, is majoring in biomedical engineering and minoring in chemistry. During her time in the Pratt School of Engineering, she has conducted research with Brenton Hoffman, an assistant professor in the BME department. In addition to her research projects, Xu is an active member of Females Excelling More in Math, Engineering, and Science, works as a resident advisor, and plays in the wind symphony on campus. Upon graduation, she hopes to explore research at the intersection of cell biology and materials science.

“Karen is, by far, the most talented, driven and creative undergraduate student I have ever worked with,” Hoffman said.

Outside of her work at Duke, Xu has worked as an intern at the National Institutes of Health, and at Washington University in St. Louis, where she collaborated with Samuel Wickline, a professor of medicine, physics, biomedical engineering, and cell biology and physiology. Xu also participated in the National Science Foundation Research Experience for Undergraduates at Northwestern University.

Since the scholarship’s inception in 1989, more than 7,921 students have received Goldwater Scholarships, including 67 students from Duke. Now, Xu and Lu, a Trinity College of Arts and Sciences student, can add their names to the impressive list of Duke scholars.

For a full list of winners and more information about the Goldwater Scholarship, visit: goldwater.scholarsapply.org.