Blue Devil of the Week: Harnessing the Power of Technology 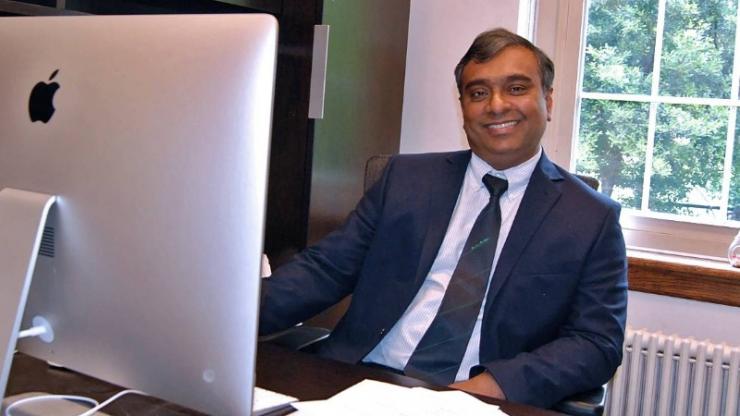 What he does: When Chakrabarty started his career in computer science and engineering, the goal was to make computers smaller, more reliable, faster and more efficient. Now, with computer technology evolving at a rapid pace, Chakrabarty’s work tries to find new ways to harness it.

Chakrabarty’s most well-known area of research uses the increased capacity and connectivity of the smallest computers to create and refine tiny self-contained, automated networks of sensors and processors capable of completing a wide array of computational tasks.

In his role as a mentor to graduate students in Duke’s Electrical and Computer Engineering Department, Chakrabarty preaches the importance of seeking out problems that the creative use of these powerful, microcomputers can solve.

“It’s still in the very early days,” Chakrabarty said of this kind of technology. “The landscape is very open, we have barely scratched the surface.”

His work earned him the Humboldt Research Award in 2013, a Hans Fischer Senior Research Fellowship from the Technical University of Munich in 2016, the Charles A. Desoer Technical Achievement Award from the IEEE Circuits and Systems Society in 2017 and a fellowship from the Japan Society for the Promotion of Science earlier this year.

What he loves about Duke: Chakrabarty said that he likely wouldn’t have had such an unfettered opportunity to explore the potential of computing anywhere other than Duke.

"When new faculty comes here, you’re not told what to do, you’re told to be the best at it.”

“I built my career here, so Duke has shaped me,” Chakrabarty said. “I couldn’t have done what I’ve done if I was not at Duke. I had the intellectual freedom to explore things and be creative. When new faculty comes here, you’re not told what to do, you’re told to be the best at it.”

Special objects in his workspace: Next to his desk, Chakrabarty has a table with an espresso machine and a kettle and tea set. He said that about three or four times per day, he’ll have a cup of tea – he collects different kinds of tea during his travels – or a small, strong espresso.

“Sometimes I picture Duke as a machine that turns coffee into theorems,” Chakrabarty joked. “Coffee in, interesting ideas out.”

“Sometimes I picture Duke as a machine that turns coffee into theorems,” Chakrabarty joked. “Coffee in, interesting ideas out.”

First ever job: As an undergraduate at one of the campuses of the Indian Institutes of Technology, the top institutions of higher education in his home country of India, Chakrabarty was a computer programmer, writing code for computers the size of washing machines.

“We had an old Russian mainframe,” Chakrabarty said. “It was kept in an air-conditioned room and you had to take your shoes off before you went in so you could program in front of terminals. Some user manuals were in Russian. We never learned to read Russian. We learned stuff on our own. We bypassed all that stuff.”

Best advice he's heard: Chakrabarty said he’s had plenty of mentors over his career. He now occupies that role for many younger people in the computer engineering field. One bit of advice he passes along, which was told to him, is to chart your own path while not worrying about trying to keep up with others.

“I don’t do my work to compete, this is a mistake many people make,” Chakrabarty said. “It’s not a competition. If you think about it as a rat race, even if you win, you’re still a rat. I don’t want to be in a rat race, I want to set my own pace and, in the end, look at the impact of my work, not just what has come out.

Something most people don’t know about him: While Chakrabarty spends a lot of time guiding students or working in a lab testing the limits of computer technology, he’s just as likely to be found in Europe with his wife and kids or around a raucous dinner table with friends.

“Most people think I work all the time and that I’m really serious,” Chakrabarty said. “I’m obviously focused on my job, but I also like to enjoy life.”