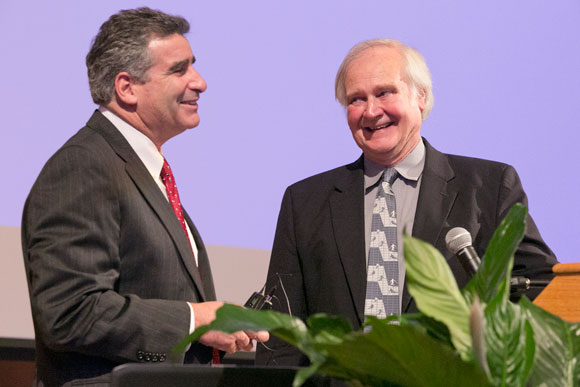 Wilson spoke about the modern cochlear implant, for which he won the 2015 Fritz J. and Dolores H. Russ Prize and which has helped more than 320,000 people hear worldwide.

In the 1980s, Wilson developed the “continuous interleaved sampling” system, which made it possible for cochlear implant recipients to understand words and sentences with far greater clarity than before.

Wilson’s breakthrough provided the basis for sound-processing strategies used widely in today’s cochlear implants and resulted in a rapid expansion in the number of deaf and nearly deaf persons who have received a cochlear implant in one or both ears. Today, the great majority of CI users can talk on phones and follow conversations in relatively quiet environments.

The talk was part of a year-long series of events for the anniversary. Pratt Dean Tom Katsouleas (pictured left) introduced Wilson.