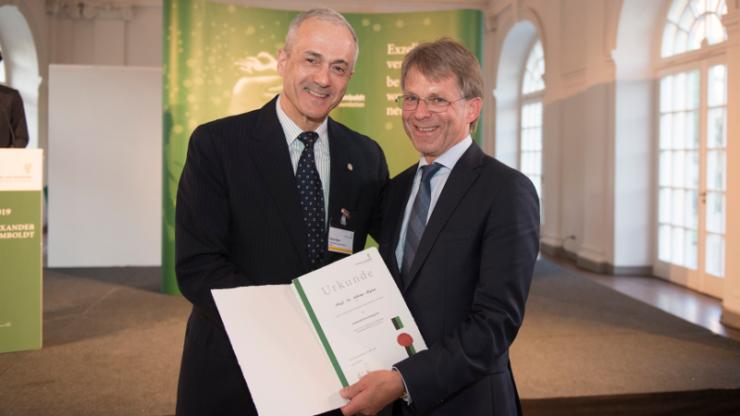 Adrian Bejan, the J.A. Jones Professor of Mechanical Engineering at Duke University, has been elected to receive a Humboldt Research Award from the Alexander von Humboldt Foundation.

The award is granted to fewer than 100 researchers each year across all disciplines. It recognizes academics whose fundamental discoveries, new theories, or insights across their careers who have had a significant impact on their own discipline and who are expected to continue producing cutting-edge achievements in the future. Winners receive a 60,000 Euro prize (currently about $68,350) and are invited to carry out research projects of their own choice in cooperation with specialist colleagues in Germany in the hopes of promoting international cooperation.

Bejan has spent much of his career working with thermodynamics and convection heat transfer, which have improved the performance of engineering systems, and on his own original constructal theory, which states that for a system to survive, it must evolve to increase its access to flow. This insight has allowed Bejan to predict natural design and its evolution in engineering, scientific, and social systems.

For example, the human vascular system has evolved to provide blood flow through a network of a few large arteries and many small capillaries. River systems, tree branches and modern highway and road networks show the same forces at work. Bejan has used these insights to explain the natural evolution and design of socioeconomic systems, the vast array of object sizes found throughout the universe, and the modern airplane, among many others.

The Humboldt Research Award comes quickly on the heels of Bejan having received the 2018 Benjamin Franklin Medal, which has publicly recognized and encouraged outstanding accomplishments in science and technology since the Institute was founded in 1824.