Duke researchers have demonstrated a genetic therapeutic technique that has the potential to treat more than half of the patients suffering from Duchenne Muscular Dystrophy (DMD).

One of the challenges of treating DMD is that the disease can be caused by mutations to a number of different DNA sequences, few of which occur with any substantial frequency. The new technique, however, gets around this sticking point by targeting a large region of the gene that contains many different mutations.

The study was published on Feb. 18 online in Nature Communications. 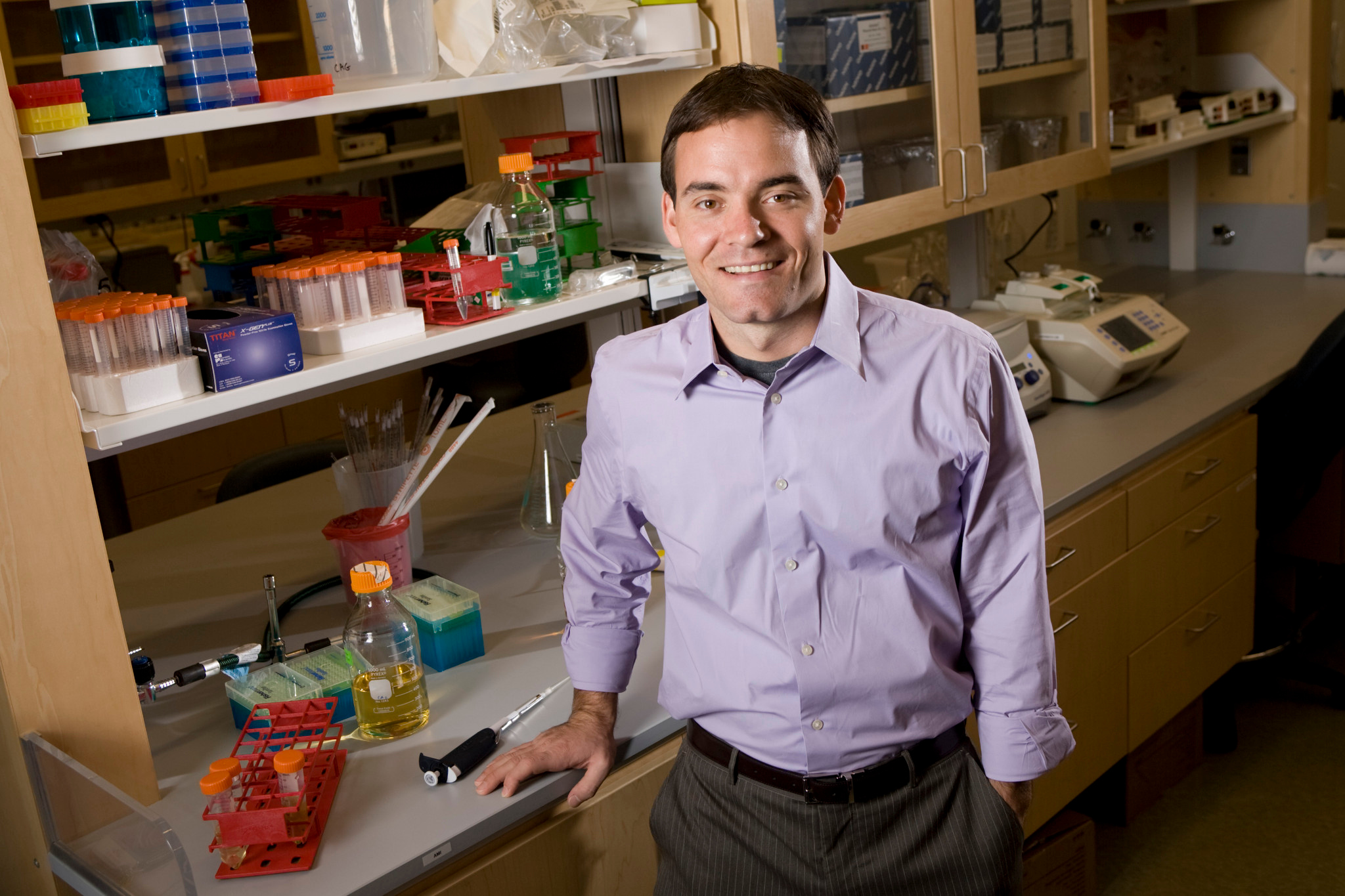 “There are no effective therapies currently available for people with DMD,” said Charles Gersbach, assistant professor of biomedical engineering at Duke University. “DMD patients are in a wheelchair by age 10 and typically die in their 20s. They have nothing to stop this right now—and we’re trying to work on that.”

DMD is caused by problems with the body’s ability to produce dystrophin, a long-chain protein that binds the interior of a muscle fiber to its surrounding support structure. Dystrophin is coded by a gene with 79 genetic “chunks” called exons. If any one exon gets a debilitating mutation, the chain does not get built. Without dystrophin providing support, muscle tends to shred and slowly deteriorate.

The disease affects one in 3,500 newborn males. The mutation is on the X chromosome so female children with two copies of X should have at least one functioning copy of the gene.

While some clinical trials are under way for drugs that restore dystrophin production from mutant genes, they only target one exon and thus can only be used for up to 13 percent of DMD cases. The new approach, however, can theoretically target any region of the gene of any size. In this study, the researchers targeted a span of 11 exons that account for 60 percent of DMD cases.

A shortened dystrophin protein is the hallmark of a variation of the disease called Becker Muscular Dystrophy (BMD). While the effects of BMD can vary widely, many patients live long, full lives, and some people live with the disease their entire lives without any significant effects.

Gersbach’s goal is to transform DMD into BMD by cutting out the genetic chain links that are most often problematic—exons 45 through 55. To shorten the genetic code, he is turning to a bacterial viral defense system called CRISPR.

Over the past decade, researchers discovered the CRISPR system that bacteria use to slice the DNA of invading viruses. Soon after its discovery, researchers hijacked the system and began using it to fix mistakes in the human genome.

“What makes CRISPR exciting is that it is easy, cheap and fast to work with compared to other methods scientists have been developing in the past decade,” said David Ousterout, a graduate student in the Gersbach lab and first author of the study.

The researchers programmed CRISPR to make cuts to the dystrophin gene before the 45th and after the 55th exon. Sometimes only one cut is made and the body repairs the damage. Sometimes both cuts are made, but the cell stitches the whole sequence back together. But sometimes, after both cuts are made, the middle of the gene floats away before the cuts can be repaired—and that’s the outcome Gersbach is after.

If it sounds like an inefficient process, that’s because it is. Even though CRISPR is continually cutting the gene for several days, human cells are very good at repairing DNA damage. But due to the sheer volume of cuts specifically at the target site, a significant fraction of the dystrophin genes are effectively altered.

In the new study, Gersbach and his team demonstrated that the technique works on cultured muscle cells taken from DMD patients. They also implanted these cells into mice and showed the treated cells began making human dystrophin.

“We still need to improve the efficiency and ensure the safety of the CRISPR-based approach,” said Gersbach. “We also need to tackle the challenge of how this would be delivered to a DMD patient. We still have a long way to go, but this is a very promising start.”

This work was funded by the Muscular Dystrophy Association (MDA277360), the Duke-Coulter Translational Partnership, The Hartwell Foundation, the March of Dimes Foundation, and the National Institutes of Health (UH3TR000505, P30AR066527, DP2-OD008586).