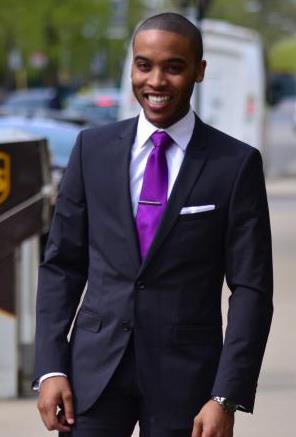 "Having a degree from the Pratt School of Engineering, people knew I had the capacity to learn, and that was important."

Those computers with modules the size of refrigerators? The ones that can fill a whole room that needs its own air conditioner, like you remember from 1980s movies? They’re called mainframes.

IBM still builds them for the world’s top banks, insurance companies, and other enterprises where 45 seconds of downtime could cost tens of thousands or millions of dollars. If you’re an executive at an enterprise like that, JaRet Watkins thinks you should buy one, too, and he will be happy to arrange it. He sells them for a living.

“We call it IBM System Z because it’s near-zero downtime,” explains the Chicago-based technical sales representative. “Banks and insurance companies keep all their transaction data on here, because they’re designed to be reliable and available for business purposes. We can take what you have on a whole farm of Linux servers, a hundred or two hundred servers, and put all that on one mainframe.”

The machines are manufactured to exacting standards and are redundant upon redundant. If a chip should fry inside the machine – unlikely, Watkins stresses – a backup chip will automatically take over, and the mainframe will send an electronic signal to IBM, which will send a technician to install a replacement. And the technician can make the repair without turning off the system.

That robustness removes risk for business executives, and so it has tremendous value to companies. Therefore, it doesn’t come cheap, and that means Watkins routinely brokers major deals, hitting sales targets around $4 million per quarter. The position is his first after completing his master’s in engineering management at Duke University’s Pratt School of Engineering in 2010 (he also holds a Duke bachelor’s in biomedical engineering.)

“I had known for a while I wanted to do engineering,” he says. “My mother was a math teacher, and I was always good in math and science, and so it was natural. If I came to Duke, I knew I could pursue either engineering or a career in business, which was what I was leaning toward. I wanted the technical background and an engineering degree.”

The engineering management master’s program pairs technical engineering courses with marketing, management, and finance classes – “like a mini business school for engineers.” Watkins focused his studies on the information technology industry. He did group projects creating a marketing plan for an early-stage children’s “edu-tainment” toy, developed strategic options for integrating the global information technology and communication platforms of the Duke Clinical Research Institute, and helped write a business plan for an anesthesia vapor alarm product for a medical technology company.

He also interned in the Duke Office of Licensing and Ventures, where he researched commercialization opportunities for new biomedical technologies, writing opportunity reports about possible real-world applications for university research.

But perhaps the most valuable skill he uses daily from his Duke education is the ability to learn quickly and efficiently all the time, he says. And emphasizing that helped him land his position with IBM.

“Having a degree from the Pratt School of Engineering, people knew I had the capacity to learn, and that was important,” he says. “Once you get a job, you’re not going to know everything that the job requires. You’re going to have to learn to do the job well.”

And Watkins says his Duke engineering education taught him how to discern which information is most important: “I learned how best to harness information, to sip from a fire hose, to extract the relevant fact or piece of data. The engineering program showed me how to process a lot of information quickly and effectively.”

The program chair of the National Society of Black Engineers and president of Kappa Alpha Psi fraternity while at Duke, Watkins enjoys step-dancing. He also likes to ski and snowboard and plays the guitar.

Watkins is gaining valuable sales experience now, he says, and down the road, he hopes to launch his own venture. He may have an innovative idea in mind, but he declines to elaborate.

“Eventually I want to own my own tech company and realize some of my passions,” he says mysteriously. “I particularly love consumer technology.”