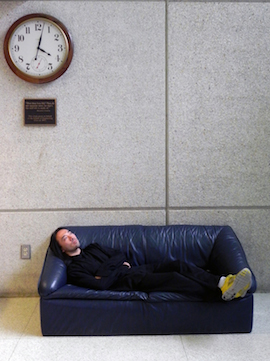 I’ve always been proud to be a Duke alum, but never more than now.

Ge Wang is on a roll, and it all started in Duke’s computer labs and music classrooms—along with plenty of late night naps on Duke couches.

Wang, an associate professor at Stanford University’s Center for Computer Research in Music and Acoustics (CCRMA) and co-founder of the software company Smule, got his undergraduate degree in computer science from Duke in 2000.

He often worked late into the night at various computers labs around campus, and it was easier to catch an hour or two of sleep on campus instead of returning home. Before he graduated, he’d figured out how to make the most of the arrangements.

“You can stretch out on the couches outside the Teer computer lab,” he said. “But the couches at LSRC D wing are too short. So I would push two together to be fully supported.”

Beyond fond memories of temporary sleeping arrangements, Wang remembers Duke as the place where he discovered the possibilities of computer music. After taking an electronic music course with Scott Lindroth, Vice Provost for the Arts and Professor of Music, and computer science classes—including some from Owen Astrachan, Director of Undergraduate Studies and Professor of the Practice of Computer Science—the future opened up for him.

“I realized that music and computer science don’t have to be different things,” Wang said when he returned to Duke in September to speak with students about computer music and entrepreneurship as part of a special school-wide colloquium with Duke Engineering, the Computer Science Department and the Information Initiative at Duke (iiD).

Since leaving Duke, Wang has focused his efforts on his passion for computer music education and research. He developed ChucK, a music programming language; became co-director of Princeton’s Laptop Orchestra; and co-founded Stanford’s Mobile Phone Orchestra. Each project is a result of his desire to make expressive technology—which, in his case, is technology that makes it easier to create music.

“I want to build things and bring about change in the way people do things,” he said. “I want to give people new ways of doing things, like making music.”

Lindroth said that he’s excited by what Wang’s achieved. “Ge was at the cutting edge when he was at Duke. It’s inspirational for our students to have him come back and help them understand what’s possible when you synthesize arts and sciences.”

Wang also experiments with new ways of making music. In some ways, technology like recorded music and the radio took music out of the hands of amateurs and made it something that only experts can do. Wang wants to use technology to make it easy for anybody to make music.

“Making music is a joy unlike anything else,” he said. “These technologies can change the way people think about music and connect through music.”

His success is apparent with Smule, the software company he co-founded. Smule explores social music making via mobile devices. Wang said the company was created out of a desire to bring the projects he explores in academia to a consumer audience. More than 115 million people have downloaded their apps.

“Let’s get a million strangers together to make music. What would that sound like? What would it take?” he asked. His research explores these questions and more.

In addition to his passion for computer music education and research, Wang has recently become involved in art education. This summer he travelled to China to participate in art education for migrant workers’ children. The effort was part of the Migrant Education Action Project, developed by Shucao Mo, a senior studying philosophy, political science and theatre at Duke.

Duke has made great progress in making it easier for students to integrate arts and sciences, Lindroth said. For example, departments including chemistry and mathematics have taken advantage of the Visiting Artist in Residence Program to explore interdisciplinary connections.

Wang is excited by the direction Duke is moving and the energy he sees on campus. He credits much of this to leadership of Lindroth.

“I’ve always been proud to be a Duke alum, but never more than now,” he said.