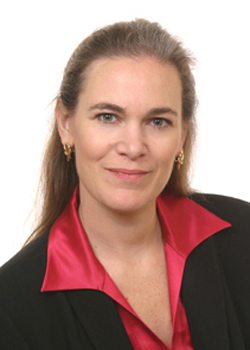 Engineering school teaches you to think "outside the box," to be creative, and to think of new ways to get things done. The varied exposure, whether it be on the materials side, on the electronic side, on the computer programming side – that exposure to technology has benefited me throughout my career.

When Celine Jimenez Crowson studied engineering at Duke, she expected to pursue a career in a technology-related discipline. It seemed like the logical choice: Her father was an engineer and growing up she was always good at math. In fact, Crowson—now a partner in the Washington, D.C., office of multinational law firm Hogan Lovells, LLP—originally considered a career in the space program.

It was the heyday of the U.S. space shuttle program in the early 1980s, and Crowson was in the thick of it. As a high school student, she worked for Bendix as an intern at the Goddard Space Center near her Maryland home, helping track the shuttle in flight. She was given the task of compiling tracking information and feeding computer punch cards into the enormous banks of computers that filled rooms at Goddard’s Maryland facility.

“It was my first exposure to real-world technology, and it was very exciting to be a part of it,” she says.

As a Duke student, Crowson majored in electrical engineering because she thought it was a versatile engineering discipline, and she gravitated toward the emerging computer industry. It was during her time at Pratt that she first thought about the possibility of becoming an intellectual property (IP) attorney.

“One of my professors, Professor George, had been an expert witness in a number of patent cases,” she says. “I talked to him about it and he had said he thought patent law would be an interesting career.”

At the time, Crowson says, patent law was not thought of as a particularly exciting career choice. Most patent lawyers in those days worked in the U.S. Patent and Trademark Office, in large corporations or at small patent law boutiques. Patent law was often viewed as a technical profession, rather than an interesting legal profession.

“Now everyone wants to get into IP, but back then it was a very uncommon thing to do,” she says.

As a law student at Georgetown University in the late 1980s, Crowson was one of only a handful of students with a background in engineering and perhaps one of only a couple of those students in her class year to express an interest in patent law. Because of its niche status at the time, IP was handled mainly in what’s known as a “boutique” practice, not at large law firms. When it came time to find a summer internship, Crowson was pretty much left to her own ingenuity.

She applied for jobs as a law clerk after her first year of law school and was hired by Rothwell Figg, a boutique firm in Washington, D.C. She quickly became immersed in her work and was able to get substantive experience while finishing her final two years of school.

“I participated in my first trial in October 1990, before I’d even gotten my bar results,” she says. “The judge allowed me to work with a partner at my firm and we tried the case together. It really allowed me to get ahead of the game.”

After hitting the ground running, Crowson quickly amassed a large portfolio of clients and was able to participate in some landmark cases that set legal precedents.

One such issue was that of personal jurisdiction in patent cases, which deals with the location where a person or corporation can be sued, in other words, where a patent litigation can be brought.

“I was involved with the landmark decision in a personal jurisdiction patent case,” she says. Crowson’s law firm represented a fan company that wanted to sue a competitor over a patent on ceiling fans. They wanted to sue in the Commonwealth of Virginia to obtain a speedy trial, although the infringing company was located outside of Virginia. Because an investigator was able to purchase the accused fan from a store in Virginia, they were able to sue in that state. “It turned out the appeals court wanted to say something on this issue and perhaps used this case to do it.”

Crowson has also been involved in leading patent cases concerning single-use licenses and exhaustion of patent rights. She often argues for the patentability of software and certain computer-implemented business methods. This area of law is still very active, says Crowson, and the application of the general legal standard for what is patentable when it comes to business processes is moving all the time as the courts take up additional examples in patent litigation. In addition to her work in the electronics and computer industries (she represents a number of the major computer and hand set manufacturers in patent litigation matters), she is also active in the areas of energy and green technology, the life sciences, and agriculture.

Crowson says her training as an engineer has always served her well in her legal work. She has been since the year 2000 a partner at Hogan & Hartson (now Hogan Lovells), and leads the core patent group in the firm’s D.C. offices.

“When you are working in technology, details matter,” she says. “Even though we work with specialists as consultants, you still have to learn and understand the technology you are dealing with in every case.”

Crowson says one of the most satisfying aspects of her work is counseling clients on the implications of new laws and court decisions on their businesses. For example, she has written articles explaining the implications of various Supreme Court rulings related to patent matters, where the Court continues to be active..

She has also been helping clients understand the implications of the patent reform act, the Leahy-Smith America Invents Act, which was signed into law in September 2011. The law was a long time in coming and effects many significant changes to U.S. patent law and practice, including moving to a first-to-file system, changes in what constitutes prior art, and new procedures for third parties to challenge patents before the USPTO or submit prior art before a patent issues. More recently, she has been active advising clients on new proposed reforms, legislation and regulatory investigations aimed at curbing the activity of patent trolls (against whom Crowson defends clients).

“Clients are interested in patent attorneys who are well-rounded and have an understanding of myriad issues related to technology, such as media,” she says.

In fact, in 2003 Crowson she found herself representing the intellectual property interests of the Belgian family whose father created the Smurf cartoon characters as the family negotiated a movie deal with Paramount Pictures and later, Sony Pictures.

The project, she says, was a great introduction to the movie-making business and the intellectual property issues that arise in negotiating with a big movie studio.

Crowson is particularly appreciative of the flexibility in thinking and problem solving skills that she gained during her training as an engineer.

“The problem-solving skills that I learned in engineering school have served me very well,” she says. “Also, engineering school teaches you to think ‘outside the box,’ to be creative, and to think of new ways to get things done. The varied exposure, whether it be on the materials side, on the electronic side, on the computer programming side – that exposure to technology has benefitted me throughout my career.”