Aeroelasticity at Duke: Why Fear Flutter?

The great aerospace engineer, Theodore Von Karman, has been quoted as saying that those who do not understand flutter fear it, and those who do understand it know why it should be feared. From the earliest days of flight to the present, the possibility of dangerous and destructive oscillations has been a source of great concern to those who build and fly aircraft and spacecraft.

In outer space, a gossamer solar sail as big as a football field speeds along, propelled only by the gentle pressure of sunlight. On earth, a jet engine revs up for takeoff, its turbine blades enduring forces 50,000 times gravity, its interior reaching thousand-degree temperatures and blasted by corrosive flaming fuel. 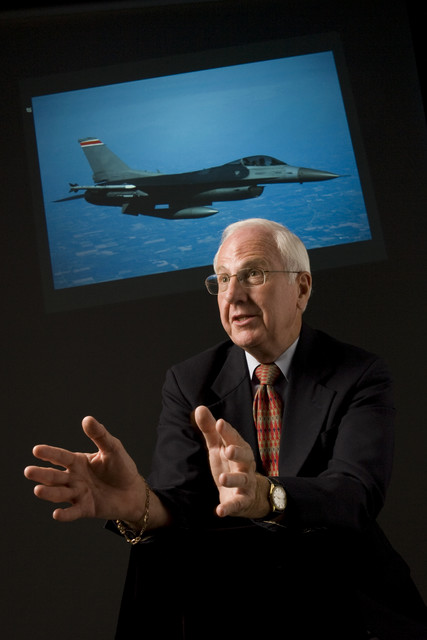 Both these machines—the heavenly solar sail and the hellish turbine—present complex research challenges in “aeroelasticity” being tackled by three Pratt school experts. Aerospace engineers Earl Dowell, Kenneth Hall, and Robert Kielb have spent decades developing methods to analyze aero- elastic forces. Engine designers and aerospace engineers are using their insights to design machines as disparate as solar sails and the turbines that power just about all electric generating plants, airplanes, and windmills.

The solar sail being designed by NASA is among the most exotic of these devices. Such solar sails are attractive for spacecraft propulsion because they carry no conventional fuel, using only the pressure of sunlight to propel them. In their work, Dowell and graduate student Chad Gibbs, along with colleagues at NASA Langley Research Center, are analyzing a potential oscillation in what Dowell has dubbed the field of “solarelasticity.”

“This is a kilometer-sized sail, and because solar pressure is very small, the material has to be very thin,” says Dowell. “But if you make it thin and you make it very flexible, the same solar pressure that moves it along is also large enough to induce oscillations; and these oscillations are analogous to what happens due to the fluid forces in more conventional craft.”

At the other extreme of spacecraft engineering Dowell and his graduate student, Ben Goldman, are helping analyze the aeroelastic performance of a new form of reentry vehicle called HIAD (hypersonic inflatable aerodynamic decelerator). HIAD describes an assembly of high-strength inflatable bladders, like a stack of inner tubes, meant to protect and slow down a spacecraft from the searing 3,000-degree Fahrenheit temperatures during reentry to the earth or other planets.

Dowell’s latest aircraft project is just as exotic—a giant solar-powered airplane called Vulture, designed to cruise slowly at high altitudes for years at a time. The unmanned airplane being developed by Boeing for DARPA could circle above areas of interest much longer than drones, carrying a payload of high-resolution cameras.

With its 400-foot wingspan, twice that of a Boeing 747, the lightweight Vulture could be highly vulnerable to wind gusts, so Dowell and his colleague, Deman Tang, and his students are analyzing such wing behavior in wind tunnel testing and computational studies.

Dowell and his graduate student Ivan Wang are also working on the aeroelastic problems presented by so-called “morphing” wings—which fold into different shapes to adapt to different flying conditions. Like a bird’s wing, they could yield much greater efficiency over the broad range of speeds at which aircraft operate. However, with this morph- ing advantage come complex problems of flutter and other phenomena that need to be solved before airplanes can fly more like birds.

Finally, the flutter of high performance aircraft such as the F-16 and F-35 are still challenges to aeroelastician Jeff Thomas and graduate student Madhu Padmanabhan who are working with Dowell and the Air Force to address. Mike Balajewicz is completing his Ph.D. studies of turbulence and a novel method of constructing models for this complex nonlinear dynamical system that has drawn the attention over many years of investigators including such luminaries as Werner Heisenberg, G.I. Taylor and Theodore Von Karman.

While flutter is a problem in aircraft wings, it is absolutely necessary for a very different aeroelastic research challenge—a “nonlinear aeroeleastic energy harvesting” system that Dowell is helping develop, along with former undergraduate Jared Dunnmon, who is now a Rhodes Scholar at Oxford, and Gibbs. This wind energy approach uses a flexible airfoil designed to oscillate in the wind, with the oscillation energy converted to electricity by piezoelectric material connected to it.

“This system has some real attraction because you don’t have to worry about tuning the system’s natural frequency to the wind as do so-called resonant systems” says Dowell. “You just need to ex- ceed a certain wind speed. And that speed can be very low.” While the wind-harvesting system won’t offer the high output of conventional windmills, says Dowell, it would be useful for low-power applications in remote areas.