An Adventure Abroad in Brain-Machine Interfaces

A biomedical engineering and mathematics major, the Duke senior contributed to work in the field of prosthetics by creating a brain-machine interface that senses different brain waves of a subject and converts them into movements of a mechanical hand. 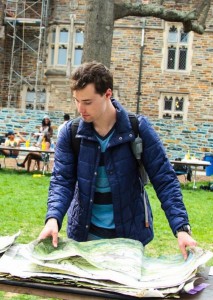 McCann, who had never traveled to Europe, let alone lived there for three months, took his foreign adventure one step further and pursued cutting-edge research in Rand Almajidy’s biomedical engineering lab in Germany. McCann was paired with the University of Freiburg for a Research Internship in Science and Engineering by the German Academic Exchange Service.

McCann combined two prominent biomedical techniques, tri-polar concentric electroencephalograms (tEEG) and near-infrared spectroscopy (NIRS), to pick up the brain activity of his subjects. EEGs are the typical devices one pictures when imagining recording brain activity: electrodes stuck all over a subject’s skull to pick up neuron firing when particular brain regions are active.

NIRS is a novel way of measuring brain activity. A common application of NIRS is in the pulse oximeter, or the plastic clip-like contraption doctors place on your finger to measure pulse and blood oxygenation. McCann used NIRS to measure the blood flow in different regions of the subject’s scalp. Different patterns of blood flow indicated dynamic brain activity.

McCann’s major challenges in the project were processing complicated EEG signals and removing noise from these signals in order to correctly classify each of the movement intentions. He worked with vast amounts of training data from subjects who had practiced focusing acutely on each of the movements.

He ultimately isolated the specific frequency bands whose power was modulated most drastically during the three movement intentions he was targeting. These frequency bands served as the basis for his machine-learning algorithm, which matched known data the subjects had been trained to produce with unknown thoughts about movement.

After developing his algorithm, McCann tested it on unknown data, in which subjects thought about moving their right hand, their left hand, and their feet in some arbitrary sequence. McCann’s algorithm ultimately obtained impressive accuracy of up to 80% when categorizing unknown thoughts about movements.

Through his research, McCann demonstrated the feasibility of rapidly creating functional prosthetics from simple materials and only open-source software. His prosthetic hand proves promising to medical innovation, as it represents a non-invasive, functional brain-machine interface. Ultimately, his success sheds optimism on the future of prosthetics.