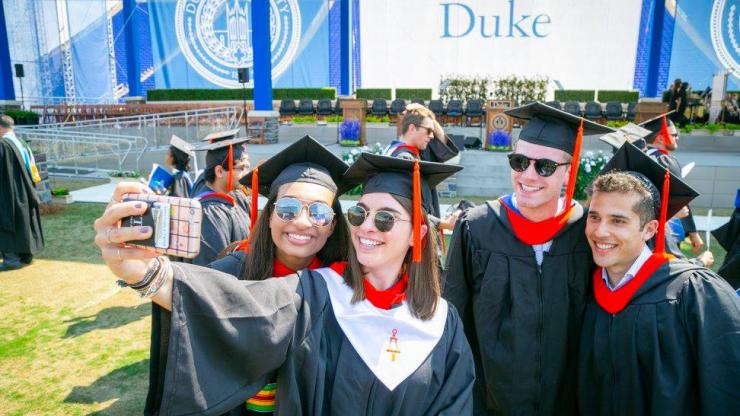 On May 13, 285 students flipped their tassels to become the newest bachelor’s  graduates of Duke University’s Pratt School of Engineering. Although each student had their share of unique experiences at Duke, they now face the same question: What’s next?

For Duke Biomedical Engineering (BME) graduates, there is no shortage of opportunities. More than 40 percent of BME students will continue their education by going on to graduate and professional schools, including Harvard Medical School, MIT and the Johns Hopkins University School of Medicine. Others will pursue internships or travel opportunities to continue to cultivate the skills they learned at Duke. But the biggest draw for students is employment, with a majority of our graduates going on to full-time jobs after graduation.

According to Medical Product Manufacturing News, Duke’s BME department is ranked #3 in the country for highest median starting salary for biomedical engineers, with graduates earning an average yearly salary of $70,000 at their first job. Duke BME students have also been able to use their degree to pursue jobs in a variety of fields, including biotech, pharmaceuticals, medical device development, healthcare and medicine, and computing and IT services.

To learn more about a few of our recent graduates, check out our BME Graduates Video Series:

Sydney Jeffs, a BME major, will move to Boston where she'll work in a tissue engineering lab at the Massachusetts General Hospital while she applies for MD-PhD programs. During her time at Duke, Jeffs worked in the West lab, graduated with departmental distinction and recieved the Helmholtz Award for her senior research project.

Karen Xu was a BME major, and during her time at Duke she was named a Goldwater Scholar and recieved the Howard G. Clarke Award. In the Fall of 2018, Xu will attend the University of Pennsylvania in MD-PhD program.

Vincent Miaocompleted research on biomaterials in the Chilkoti lab during his time in Duke BME, and he recieved the Helmholtz Award for his senior research project. After graduation, Miao will be working towards a PhD at the medical engineering and medical physics program at the Harvard-MIT Health Sciences and Technology program in Boston.

After graduation, Jocelyn Corey will start work at Plexus Corporation as an analog hardware engineer where she will help design medical devices. During her time at Duke, she worked with Duke Engineers for International Development to design and build a bridge in Rwanda.

Emelina Vienneau received the Howard G. Clark Award and graduated from BME with departmental distinction. During her time at Duke, Vienneau worked in the Yao lab, and she will attend Vanderbuilt University to pursue her PhD.

Harvey Shi double-majored in BME and Computer Science. During his time at Duke he completed research in the Randles lab and helped develop a unique version of a fitness tracker as a final design project.

Learn more about our previous graduates:

Amy Xiong was a BME and ECE double major, and during her time at Duke she participated in the DukeEngage and Engineering World Health programs. After graduation, Xiong will return to her home state of Minnesota to work as an engineer at Medtronic, a medical device company.

Stephen Page, a BME and ECE double major, credits his work ethic to the motivated students and faculty he encountered at Duke. Page will be an engineer at Keytech, an engineering company in Baltimore, Maryland, after he receives his degree.

After graduation, David Whisler will start work at Stryker Surgical Robotics. Whisler, a BME and ECE double-major, is looking forward to his new role, which combines his interests in biomedical and electrical engineering.