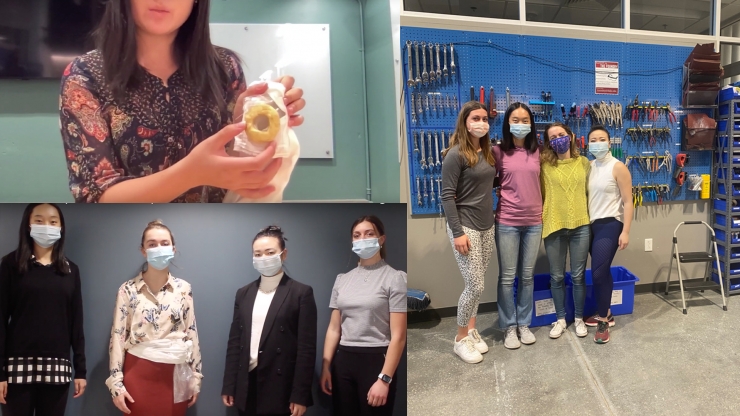 In Duke Engineering’s signature First-Year Design program, students in the Pratt School of Engineering spend a semester working on project-based design challenges for their local, national and even global community. When the program first launched in the fall of 2017, it was intended to give new engineering students practical and immediate hands-on design experience. In the intervening years, these student teams have gone on to find success in a variety of national design competitions.

Most recently, the team of Alanna Manfredini, Joanna Peng, Darienne Rogers and Amy Guan triumphed at the National Institutes of Health’s 9th annual Design by Biomedical Undergraduate Teams (DEBUT) Challenge. The team’s project, named LowCostomy, received the National Cancer Institute Prize for Technologies for Cancer Prevention, Diagnosis and Treatment. The team received $15,000 in prize money in recognition for their work.

“It was really rewarding to see that all of our hard work was being recognized,” says Manfredini. “It is so easy to make a design that you think solves a problem but is actually something that nobody really wants. To know that a national, governmental organization thought we could change lives with LowCostomy was an incredible feeling.”

LowCostomy was designed to be an affordable colostomy bag for cancer patients in need of ostomy procedures. Ostomies are necessary when parts of the bowel are diseased or must be removed, which typically occurs during colon cancer. These are lifesaving procedures, but the colostomy bags can be prohibitively expensive and difficult to access, especially in resource-limited settings.

Rather than rely on homemade solutions, which can cause leakage and discomfort, the LowCostomy team developed an affordable colostomy bag made of recycled materials like plastic water bottles and small plastic bags. The tool also contains odor, is low cost and can last up to two weeks. The material is also easy to clean and environmentally friendly.

“I enjoyed thinking outside of the box in terms of maximizing the usage of cheap local materials in Tanzania for the construction of the LowCostomy bag,” says Guan.  “The simplicity of using repurposed materials including plastic water bottles, plastic bags, and cloth to create a life-changing medical device is truly exciting.”

“We were drawn to this project because it seemed like a great opportunity to extend our work beyond the realm of a one-semester course,” says Rogers. “I saw it as an opportunity to work towards something real and to create a meaningful solution that would have a lasting impact on people around the world.”

“It was incredibly encouraging to know that there were other professionals in the bioengineering world who believed in our cause and design as much as we do,” says Peng. “Along with the encouragement we received, the award money will allow us to explore the possibility of a clinical evaluation in the US or sub-Saharan Africa. Receiving the award made all of us feel a major step closer to being able to deliver the LowCostomy bag to our client.”

The team is now figuring out how to advance their prototype using materials that are easily accessible in Tanzania in place of the materials used in America. In addition to gaining IRB approval and completing a clinical evaluation, the team is developing a standard operating procedure that will easily explain how clinicians across the globe can construct the LowCostomy device using provided materials.

“I am very proud of the team,” says Saterbak, the director of the First-Year Design program.  “Their enthusiasm and commitment to their project has been impressive. I am also very appreciative of the work and contributions of Dr. Dorothy Dow, a physician with appointments at Duke and Kilimanjaro Christian Medical Centre in Tanzania, who served as the team’s clinical partner.”

The DEBUT competition is considered a premier undergraduate design contest in biomedical engineering. For the 2021 competition, DEBUT received 76 applications from 47 universities in 26 states, which included nearly 400 students. The teams were judged on four key criteria––the significance of the problem addressed, the impact on clinical care, the innovation of the design and a working prototype.

“We are committed to nurturing the next generation of researchers and this is why we champion competitions that leverage the intellectual capacity of young innovators,” says Dr. Eliseo Pérez-Stable, the director of the National Institute on Minority Health and Health Disparities (NIMHD), in a release announcing the winners. “By encouraging and supporting a culture of innovation, we are paving the way for students to think outside the box and develop cost-effective health care tools that will improve lives, especially for underserved communities.”

The National Institute of Biomedical Imaging and Bioengineering, which initiated and leads the DEBUT challenge, is supported in this effort by the NIMHD, the NIH Office of AIDS Research and the National Cancer Institute. The competition is also led by VentureWell, a non-profit higher-education network that supports science and technology innovation and entrepreneurship in higher education.

The students will receive their award during the annual Biomedical Engineering Society conference on Oct. 6, 2021.